Sibley Park Zoo and the 1965 Flood

Sibley Park Zoo and the 1965 Flood 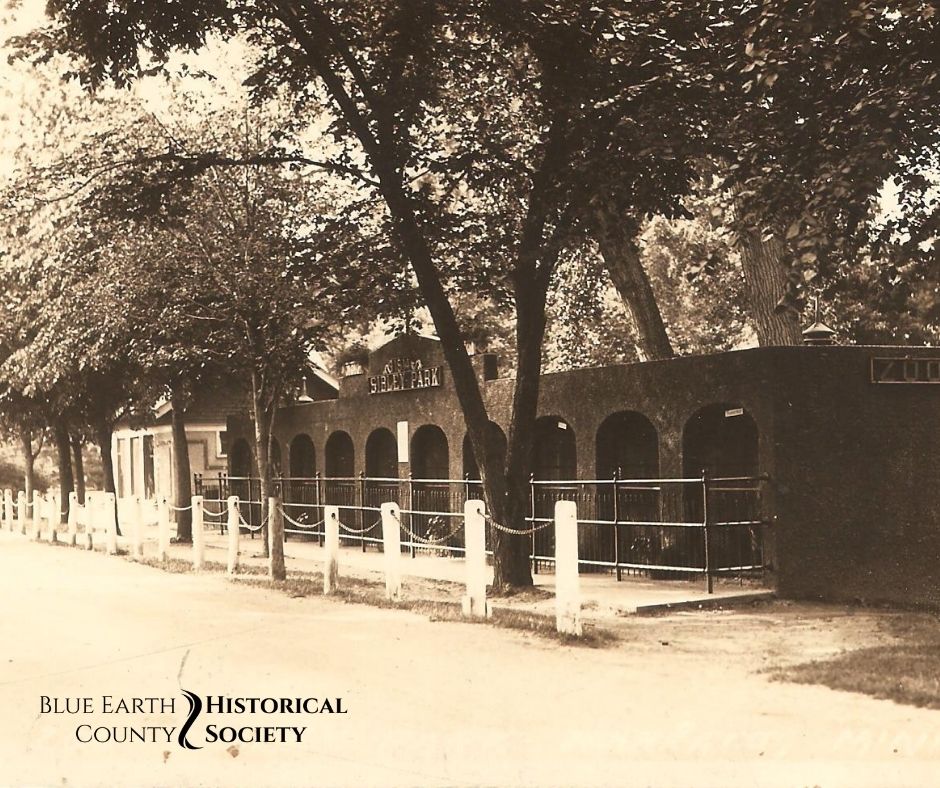 The Sibley Park Zoo underwent major changes due to the 1965 Flood. The Minnesota River crested just over 29 feet on April 10, 1965.  Those who sandbagged, recorded water levels, helped families evacuate homes, made sandwiches, and the multitude of tasks needed in a time of crisis could breathe a little easier.  True, there had been flooded basements and roads washed out across the county.  True, there had been major damage in Le Hillier and West Mankato.   Madsen’s Valu Center was described as “a merchandising Venice” as boats rowed its aisles recovering produce and the High School was an island in a lake, flooded not directly by the river, but by geysers of water coming through manhole covers in the parking lot.

One of the saddest stories from those 72 hours of trying to protect the city from rising rivers was the tragedy at the Sibley Park Zoo.  Flood forecasts were for a crest of 23 feet.  Officials thought they were prepared.  They had made plans to move some smaller animals to area farms and to erect four to five-foot platforms in the cages of bigger animals.  But the river had different plans.  On Thursday, April 8, at 2:00 in the afternoon, the primary dike at Sibley Park holding back the Blue Earth River, broke.  The park office and the zoo were abandoned.  Cages were opened for some of the non-dangerous small animals to escape, and fences were broken down to allow larger animals to move to higher ground.  The fight continued to stabilize the secondary dike at 5th Street.

A Mankato Free Press headline for April 10 read “Think Animals in Park Still Okay.”  Park officials had ascertained that the water had not reached the bear cage.  Even though they were free to move to higher ground two adult elk stood in neck-deep water, while two young ones had climbed into their feed trough.  The rescuers could not reach the lions, but through a telescope, they thought they could see a tail swishing.

However, the Monday, April 12 headline told a different story.  It read “Flood Kills Most Animals in Zoo.”  On Sunday, using boats, the elk and buffalo that had refused to move out of their areas, were driven to higher ground.  The female elk escaped, swimming the Minnesota River, and in the following weeks, there were multiple sightings of an elk wandering in North Mankato.

The skin diving club, the Indian Aquanauts from Mankato State College, using guide ropes tied to trees, checked the indoor cages.  The report was not good.  Ultimately 25 animals either drowned, died from exposure, or simply disappeared.  These included monkeys, foxes, a lynx, a coyote, two timber wolves, a collared peccary (a South American wilds pig), an agouti paca (a South American rodent), and the two lions who had shallow water in their cage and apparently died from exposure.

Later that month the small animals that had survived were transferred to Como Park Zoo; four monkeys, two alligators, and one coatimundi.  One of the monkeys, named Annie, whose mate had died in the flood, apparently remained in deep grief.   Although she joined other Rhesus monkeys, she spent most of her time in a far corner, covering her eyes and sometimes sucking her thumb.  In the early 1970s, the small buffalo herd was moved to Blue Mounds State Park near Luverne, and the last bear relocated at Como Park Zoo.  All remnants of the Sibley Park Zoo were gone.

Less than a week after the destruction, headlines called for a new zoo, built in a higher area of the park.  A group of children in the city began a “Zoo for You” drive.   A more formal group, the Mankato Area Zoological Society, was formed in the summer of 1966.  Architectural plans were drawn up for a more modern and inviting zoo.  However, a bond issue to help cover the cost was defeated in April 1968.  Sibley Park would wait until the mid-1970’s when the Mankato Exchange Club established the petting zoo.

Learn more about Floods in Blue Earth County with this Video on Demand.

A History In a Minute about 1965 – the blizzards and Flood.