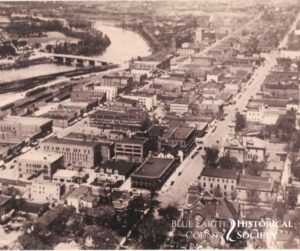 Key City was the nickname for Mankato for many years, and can still be found in the names of several businesses, even though the business might now be located in North Mankato or Lake Crystal!  But the city could just as easily have been nicknamed Stone City or Elbow City because it is at the elbow of the river.

The Free Press began a contest in the summer of 1924, trying to find a “suitable and original nickname which will in the future give the town atmosphere and character.”  It was suggested that the name should be short enough to fit into a headline.  The paper also cautioned that whatever idea was submitted, “be careful with the name you select for it is liable to stick with Mankato for a long time.”   The nickname contest was so popular that the Chamber of Commerce took it over, offering $25.00 worth of prizes.  The contest ended in September 1925.

There was a surplus of suggestions based on Mankato’s geography: Basin City, Hills City, Valley City, Bluff City, Two Rivers.  Some entries considered the schools: Studentville, City of Schools, or The School City.  Others reflected the economics of the area: Flour City, Palmer Mill, Rock City, The Hospital City, The Shopping Center, The Financial center, or The Business City.  George Ramer proposed the name Rapid City because Mankato was “rapid in business transactions, rapid in athletics, rapid in social lines.”  Other submissions were idealistic: The Farmer’s Paradise, The Rainbow City, Paradise Valley, The Only City, or simply Utopia.  Mrs. Frances Young entered Bliss City, “because where can one find a city with more blessedness and delight.”  Kato was not distinctive enough.

Mrs. E.W. (Emma) Davis was the winner, receiving $10.00 for her entrance of Key City.  Second Prize of $7.00 went to Mrs. Georgia Day for “The Scenic City.”  “The Magnetic City” was the third prize, winning $3.00.  The next five winners received $1.00 each for “The College City,” “Elbow City,”  “The Stone City,” The Quarry City” and “The City of Enchantment.”  The committee had hoped someone would enter “Marble City” since that was their preferred nickname.

Key City was not completely original to Mrs. Davis.  The State Sunday School Convention had been held in Mankato in 1911.  An advertisement on the back page of the program, which was sent to 25-30,000 people, called Mankato “The Key to Minnesota.”  That designation was the idea of Rev. E. L. Herrmance of the Congregational Church, who was chair of publicity for the convention.  Mrs. Davis remembered a map of Minnesota on which the K of Mankato was placed at the bend in the river.  Someone had then turned that K into a key.