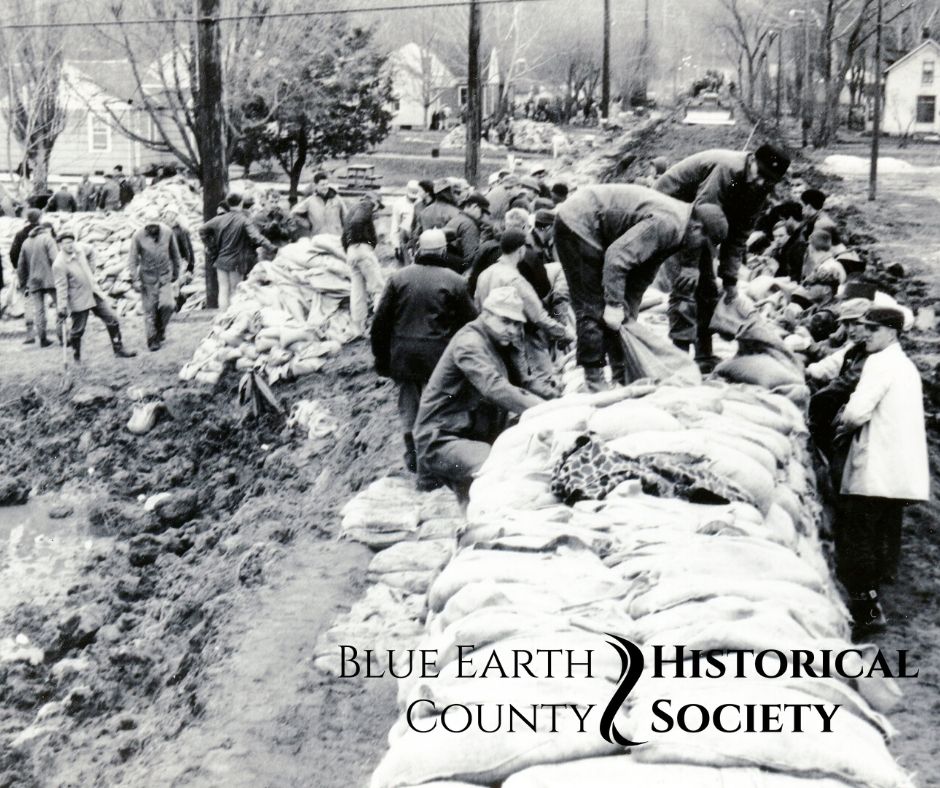 The vast amount of snow that fell in the upper Midwest during the winter of 2010-2011 created a lot of nervousness among residents of the river valleys when the spring melt occurred.  Perhaps the Mankato area was more fortunate than many communities in the lower Mississippi River system.

But summer floods can be nearly as devastating.  Given the natural peculiarities of the terrain in the Mankato area, heavy rain can become a disaster.  Two large rivers meet here and form a bowl-shaped configuration of drainage.  Ravines radiate outward and collect run-off into narrow channels.  Creeks become rivers in a hurry.

On August 7, 1968, a 7.1-inch downpour inundated Mankato. From North Front to well into the South Front, downtown resembled the canals of Venice. In fact, in order to assist in the copious amounts of basement fires that resulted from the flood, the fire department was forced to use small boats for transportation. In front of the Hubbard House, automobiles floated along with debris to pile up on lawns.  The Hubbard Carriage House suffered extensive damage to its artifacts.  Several parking lots became new lakes. An unnamed waterfall developed at the Mankato State College Valley Campus track.  Marti’s Pizza developed a new subterranean cavern. What made matters worse though was when a landslide of mud slid down the hills of Mankato uprooting trees, clogging sewers and causing millions of dollars worth of damage. Mud was so thick and slippery (one intersection was clogged by up to two feet of mud) that driving became hazardous and snowplows were called out to clear Front Street and six bridges were washed away.

The floods not only deeply affected the Mankato urban area but devastated the rural areas of Blue Earth as well. Country farmers suffered almost $2 million in setbacks and production was severely hampered for that season. Then Governor Harold Levander called a state of emergency for Southern Minnesota’s water-soaked counties.

Between the devastation in Mankato and the surrounding area, an estimated total of $7 million price tag came with nature’s surprise.

Learn more about Floods in Blue Earth County with this Video on Demand.

A History In a Minute about 1965 – the blizzards and Flood.