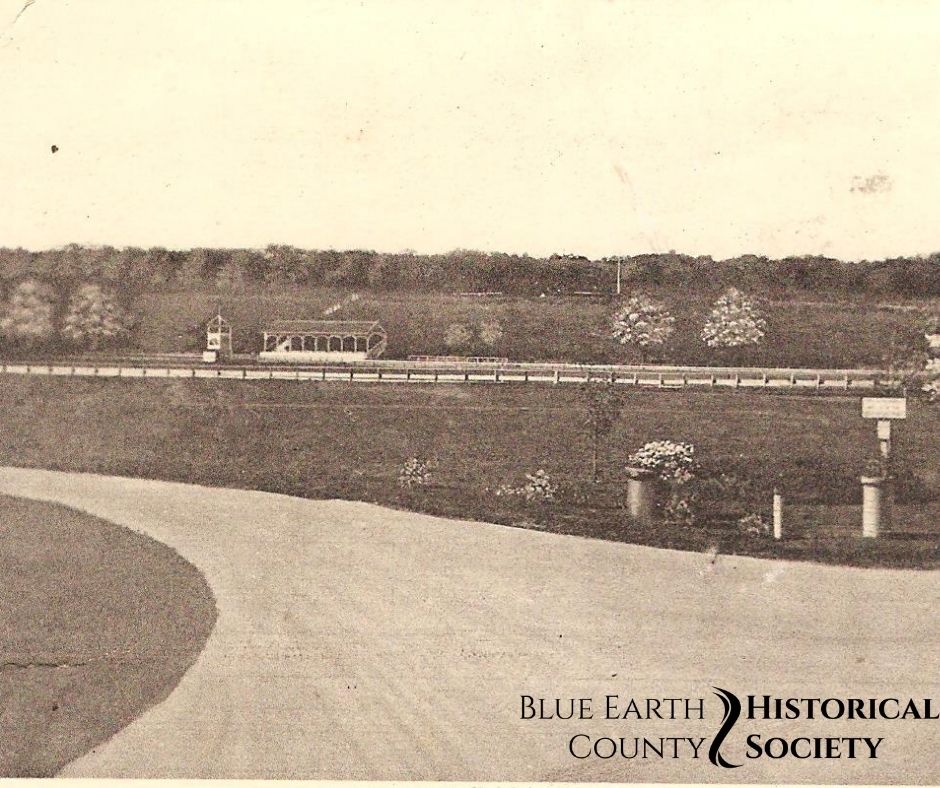 Racing was once a popular pastime in the Mankato area: foot racing, bicycle racing, and horse racing.  Foot races were popular in the mid-1880s, some as long as one mile.  The interest turned to bike racing in the 1890s, several meets held each summer.  In 1894 a mile race was won on the track in 2.34 minutes, the fastest time ridden in Mankato.  But harness racing, also referred to as “trotters and sulkies,” was always the most popular.

In the late 1850s races were held on Sundays, running on Broad or Front Street.  The races then moved to the “prairie” north of town, also called the Mankato Driving Park.  A mile track was laid out in Germania Park in the 1870s, and races were often held in conjunction with fairs.

The race track at Sibley Park was constructed in 1887-88, with a canopied grandstand, starter-judges tower, and a rail-lined dirt track.  The track was thought to have been one-quarter mile long, following approximately the present circle drive.  Races were held year-round, every two weeks in the summer, and ice racing when possible in the winter. The 1890s was the “heyday’ of racing at the park.  The Daily Review for June 21, 1901, reported that there were 10,000 people at the races the previous day.  However, almost immediately after the purchase of the park land there were those who objected to such a large share of a public park being used for training horses by breeders and the racing association.    Others suggested the unsightly sheds being used be replaced by new stables, and sales could then be held of “blooded horses,” bringing business to the city.

Racing circuits were an extra draw for spectators.  The Circuit in 1886 included St. Paul, Minneapolis, Stillwater, and Mankato.  Races in Mankato on June 16-18 offered purses of $300-400 per race, with a $500 purse for a ”free for all.”  The Review reported that seventy horses were entered for the races, the largest number up to that time for any race in Minnesota.  Horses came from as far away as New York.  Fifteen horses arrived on the train, requiring five cars.  Four of the fastest horses in America were entered.

Horse racing at Sibley Park continued into the first decade of the 20th Century.  Races then became more popular at fairs.  The Blue Earth County Fair held its first races in 1899.  Racing continued at the Mankato Fair until 1929.  There are conflicting reports about whether or not Dan Patch ever ran in Mankato, but in 1928 Theda Patch, daughter of Dan Patch, was among the entrants at the Mankato Fair.  The horse was owned by Cliff Thro of Mankato.

Blue Earth County was known for its breeding farms.  The Thro Brothers’ Stable had a regional and national reputation, racing horses at State Fairs, and in Lexington, Kentucky.  Henry Himmelman Jr. owned the Mankato Breeding Stables.  At one time he had an 80-horse stable and 12-horse breeding stable.  Its most famous horse was “Senator Wilkinson,” who set a record for the mile trot at the Indiana State Fair in1897.    Dr. J.C.Curryer was considered a progressive in his breeding practices at his horse farm near Lake Crystal.  He also published the journal Minnesota Horseman for several years, and spoke and wrote widely on best practices for raising horses.

The rising popularity of baseball, the attraction of automobiles, and a demand for fuller use of public park land put an end to horse racing in Blue Earth County.  The last race at the county fair was in 1929.