History of the Mankato Piece

History of the Mankato Piece 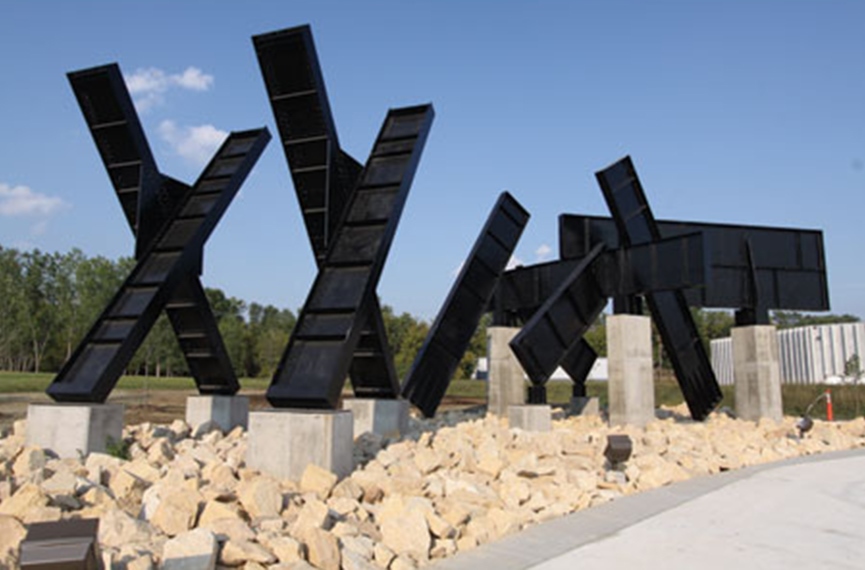 The Mankato Piece by Dale Eldred was commissioned by Mankato Fine Arts Inc and has an interesting history. in 1968 and paid for by Bretts and First National Bank. Dale Eldred was suggested to Fine Arts Inc. by the Walker Art Center, based on his past work involving city renewal projects. In 1968, Dale Eldred had sculptures in only a few states in the US but had exhibited his work in museums such as the Walker, Museum of Art at the University of Kansas, and Museum of Modern art. In designing his sculpture for Mankato, he focused on how the work would interact with the space around it. It was originally located in a parkette on Hickory Street, in between a parking ramp and the Eagles Club.

Eldred’s design for the sculpture featured steel trusses of old railroad bridges as the main focus of the work. Before the steel sections were brought to Mankato, a concrete foundation had to be built to support the beams. The steel beams arrived in Mankato by train and were transported by truck to the site. Eldred worked with an assistant, Paul Slepak, as well as construction and engineering crews to assemble the work.

Throughout the construction of the work, Eldred and the other workers received many questioning glances from passersby. While some members of the community considered the work to be dynamic, daring, and even timeless, many citizens questioned the purpose and meaning of the work. After the work was constructed, it was visited by many people from both inside and outside of Mankato. In 1968, Mankato Fine Arts Inc. won an award from the Minnesota State Arts Council for their involvement with the Mankato Piece.

The sculpture remained in its original location for many years until Heco Partnership Inc. sought out the space to build a multi-story office and apartment complex. To make way for the building, the Piece had to be moved, but the city was unsure of where to reassemble it. Some suggestions for the sculpture were the Minnesota State University campus, Sibley Park, or near Blue Earth County courthouse. After much deliberation over the placement of the work, as well as concern regarding the cost of the move, the work was taken down and eventually reconstructed near the north entrance of the Park Street parking ramp in 1982.

However, this was not the last move for the Mankato Piece. In 2004, H&E Enterprises planned to construct a Hilton Garden Inn which required the Piece to be relocated. This move garnered significantly more controversy than the last, as people started to question the value of the work compared to the cost of reconstruction. Many suggestions were given regarding the future of the work such as moving it to a spot near City Hall, near the Graif Building, or on the MSU campus. Some people even suggested selling the work. In 2005, Mankato Piece was taken down and placed in storage to allow for the construction of the hotel. Finally, in 2009, the work was taken out of storage and reassembled at its current location in Riverfront Park.