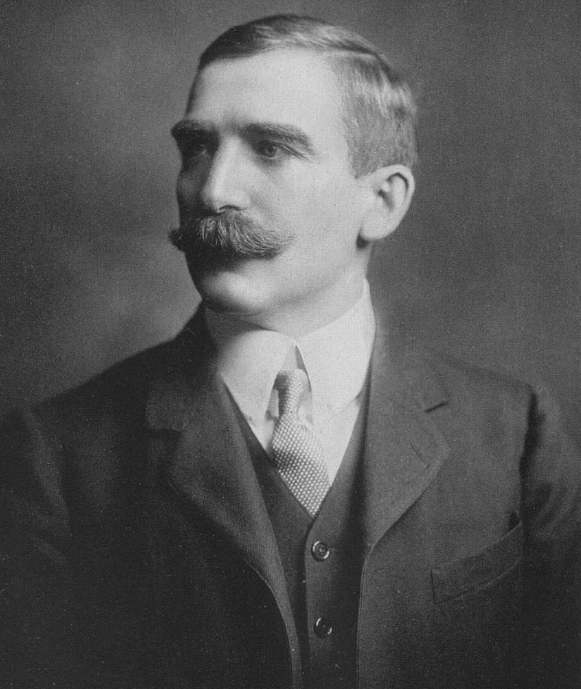 Garden City was a thriving community in the mid-1800s.  Blessed with the Watonwan River for power, a road leading into Mankato, and surrounded by forest and farmland, by 1868 the town boasted three grist mills, four general stores, two drug, and grocery stores, a hardware store, hotel, blacksmith, tailor, a two-story schoolhouse, three churches, and several other businesses.

The family of Solomon Wellcome arrived in this flourishing community in 1861, joining his brother Jacob, a doctor already established in the village.  Solomon took over the pharmacy and general store that Jacob had begun and served as a lay preacher in the Adventist Church.  Along with the Wellcome family came eight-year-old Henry, who would become Sir Henry Wellcome and would leave a bequest to his childhood home that continues to benefit the community of Garden City and the Lake Crystal Wellcome Memorial School District named for him.

Henry worked in the drug store, learning how to compound medicines.  He also helped his uncle as a surgeon’s assistant and, at a young age, helped with emergency surgeries during the Dakota Conflict.  A fortuitous meeting with Dr. W.W. Mayo, through his uncle, led to Henry’s studying in Rochester after he completed High School in Garden City.  Mayo encouraged him to continue his education, which he did at the Philadelphia College of Pharmacy.  He then worked for McKesson and Robbins, the biggest pharmaceutical firm in the United States.   In 1880 Henry and a pharmacy classmate, Cyrus Burroughs, formed the Burroughs Wellcome Pharmaceutical Company and moved to England to introduce the latest American breakthroughs, particularly in industrial research.

The company was the developer of pharmaceutical formulas that contributed to the successful treatment of many diseases, including diphtheria. Through his relationship with Sir Henry Stanley, Wellcome also led research on tropical medicines.  Encouraging education and research, Wellcome developed a trust for Medical Research which continues to the present day.

By 1915 Wellcome was already planning a gift to his boyhood home.  He asked George Palmer, a classmate, known in Mankato for his position with Hubbard Milling, to purchase land, perhaps for a library.  The school was built on part of the property in 1922.  $300 was given in 1929 for the purchase of books.  No one realized the size of the gift until Wellcome’s death in 1936.  He had envisioned an athletic field, a public park, library and auditorium, and a mausoleum for the internment of his parents, uncle, and brothers.  Local people, hearing this plan, thought sidewalks and a sewer and water system would be more practical.

It was impossible to get the money out of England during the Second World War, and after the war, the value of the trust had diminished.  It was not until the mid ‘50’s that conversations began on its use.  Garden City didn’t need a park, nor an athletic field.  The British courts would not approve any plans for a mausoleum.  The school was the principal activity in the community, and it needed a new gymnasium/auditorium.   $250,000 of the Trust was used in 1957 to build the gym with a stage, a library to be used by the school as well as the public, and a public meeting room.  As the town hall was moved to make room for the Wellcome Building, the Garden City Township Board has free use of the community room.

The High School band, under the leadership of James Wingert, played for the Processional and the Recessional.  Local clergy offered the invocation and benediction.  The Wellcome Memorial was presented by Sir Henry Dale and accepted by Governor Freeman.  A portrait of Sir Henry was also presented, along with a $150,000 endowment for maintenance.  From that amount, scholarships have also been offered.

The little community of Garden City, Minnesota made the newspapers of London, England that day.  A writer for the Evening News observed “A tiny village in the American Midwest has just turned the tables on history – it is believed to be the first place in the United States to get post-war dollar aid from Britain.”

Today, sixty years later, the Wellcome Trust is under the control of the Blue Earth County District Court and overseen by five trustees.  The Trust continues to offer scholarships, and maintain the building.  The portrait of Sir Henry hangs in the community room along with murals painted by some art students and community members showing Garden City in the 1880s on one wall, and the Wellcome buildings in London, England on another.  The Union Jack hung in the gymnasium until recent improvements were made to the room, and the fragility of the flag of discovered.  At the present time the land, building, equipment, and endowment fund is worth almost four million dollars.