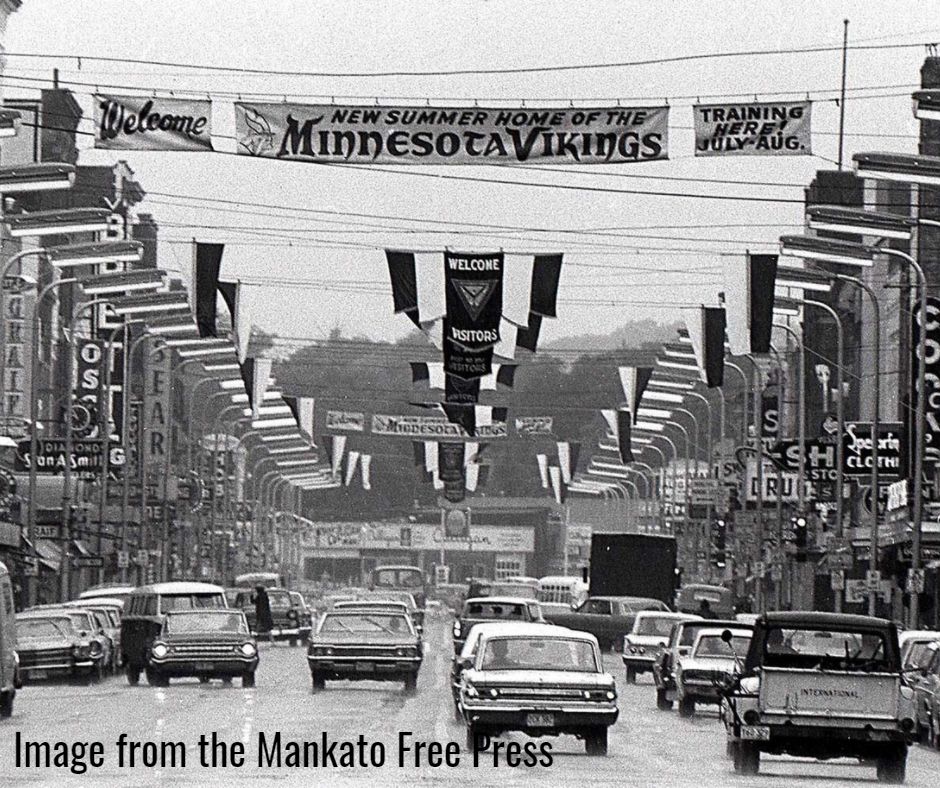 Vikings have called Mankato their pre-season home from 1966 – 2017.  The Vikings have seen players and coaches come and go but there are some interesting stories to be told about their time in Mankato.

In 1980 Fred Bock was the first Mankato-born football player to play in an NFL game.  Bock was a graduate of Mankato West High School.  After high school, he went on to play college football at St. John’s University for legendary head coach John Gagliardi.  While at St. John’s University Bock set a couple of records, such as the longest punt (63 yards), best single-season punting average (49 yards per kick), best season average, and best career average.  Bock got his chance to kick in a pre-season game against San Diego.  However, the odds of becoming a professional athlete are about the same as winning the lottery.  Bock was eventually cut from the Viking’s roster.

If you were in the Mankato area during the early 1990’s you may have heard head coach Dennis Green’s voice over the airwaves.  Green exchanged his football headset for the equipment of a radio host.  Green talked about and played some of his favorite jazz music on KMSU in 1993.  In 1994 Green was on “The Wednesday jazz Huddle” on KXLP 93.1 FM.  During this show, he played music from artists like George Benson, Stanley Clarke, and David Sanborn.  Green could be seen in the studio with sunglasses on and snapping his fingers to the music.

I remember driving by Gage dormitory and seeing security making sure that only authorized people got through the gates.  But in 1994 Bob Schramski was the gatekeeper.  He got the job in the 1980s when the Vikings were looking for a permanent gatekeeper.  Thanks to a recommendation from Denny Ryan, the Vikings’ equipment manager, who became friends with Schramski when he was a MSU maintenance employee.  There was a good story about Schramski in the Free Press article I looked at.  While Schramski was at the gate Vikings president and CEO Roger Headrick tried to get through the gate.  But, Schramski stopped him and told him that he didn’t have the right pass to get beyond the gate.

When the days get hotter and more humid then it’s about time for Viking training camp.  And the crowds of people line up along the fenced areas hoping to get an autograph from their favorite players.   Football season is just around the corner and the cooler weather is just about here.  We cheer and hope that this year maybe, just maybe, the Vikings might win the Super Bowl.

Sadly, in 2018, the Vikings moved to their new facility to hold training camp, moving it out of Mankato.