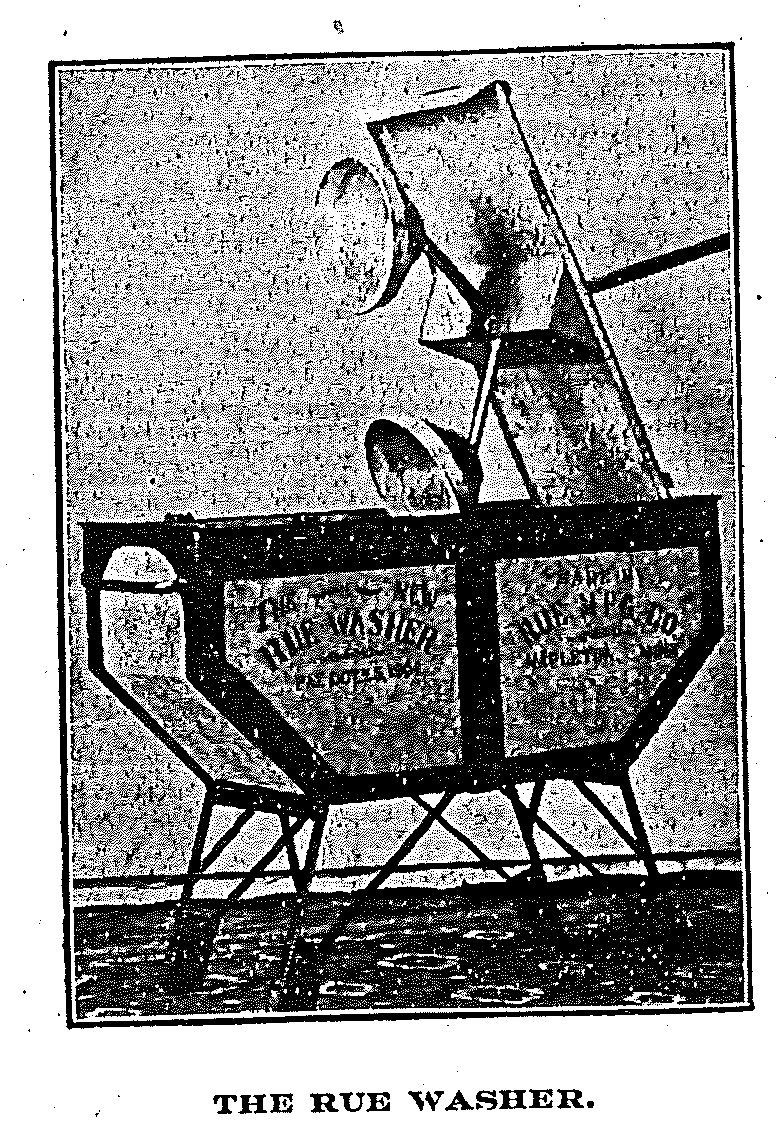 “Do you love your wife?  If you do, you will buy her a Rue Washer.”  So read a 1905 advertisement for a Rue Washing Machine, produced in Amboy in the early 20th Century, with a brief detour to Mapleton.

Edward K. Rue was the inventor of the washer.  Becoming familiar with the hardware business in Northern Iowa, by 1897 he, along with his brother and brother-in-law (Rue, Peterson, Rue), owned a hardware store in Amboy that also sold furniture and farm implements.

Rue had a creative mind, and in 1904, he received a patent on a windmill that was purported to be stronger, more durable, and would run at a uniform speed.  By 1921, Rue had five patents, including for his washing machine.  He had sold washing machines in his hardware business and had heard the complaints, particularly concerning wooden tubs which fell apart when it got too dry.  Rue’s machine was entirely galvanized iron so that it would not warp, rust, leak, or fall to pieces.  It weighed just 50 pounds; a wooden machine with water could weigh 70 to 90 pounds.  There were no pegs, slats, or ridges to tear clothing, so one could wash everything from lace curtains to heavy quilts without fear of ruining them.  There was no rubbing.  Compressed air forced the water and suds through the clothes.  Machines sold for $8.00.

Although production began in Amboy, a group of businessmen bought stock in the endeavor and moved it to Mapleton in 1905, installing it on the lower floor of the Quinn building on Main and First.  It employed ten men, making 100 to 120 machines a week.  Farwell, Ozman, and Kirk, wholesalers in St. Paul, bought the machines by the train carload.  Their traveling salesmen took orders across the upper Midwest, and the machine was exhibited at the Minnesota and Iowa State Fairs.  The businessmen of Mapleton hoped their advertising would bring more people to the town.

A few toy washers, which were totally usable, were produced for the salesmen to carry with them as examples.  Hardware dealers wanted a toy machine for their daughters.  It is not known how many toys were produced.

Rue purchased the plant and moved it back to Amboy in 1911, installing it on the main street.  Rue also manufactured hog troughs, watering tanks, windmills and cupolas, and he installed windmills, cupolas, and lightning rods.  By 1918, the company was producing manual, electric (made of copper), and gas washing machines.

Alfred Nelson because a partner in 1919, and the company became known as The Rue Nelson Washing Machine Company.  The company was moved to Minneapolis in 1920 as it was difficult to get the needed materials for building to Amboy.  A patent granted in 1925 showed some improvements on the design, including the addition of a wringer. The company disappeared during the depression.