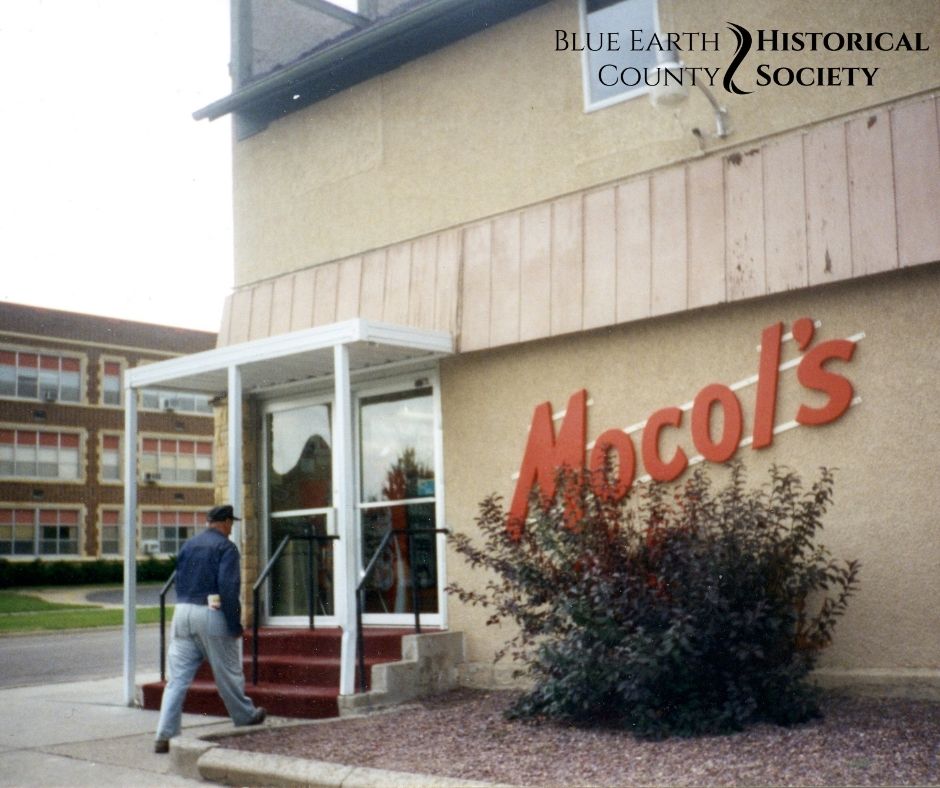 The Mocol Family Grocery Store is one of the very few, perhaps the only, neighborhood grocery stores in Mankatolocated on North Broad Street across from Franklin School.  At one time, before the coming of the super-markets, neighborhood groceries were plentiful in all towns, and Mankato had a great many.

The original proprietor of Mocols Grocery was Joseph, Sr., who came to America with his family and his mother, Mary, from Syria in the very early years of the Twentieth Century.  Joe immediately set up in the grocery business at the present site.  His family lived in the second story of the store building.  A sizeable number of families came to Mankato from Syria and Lebanon in these early years.  Most settled in the James Avenue area, which was called Tinkomville after “King” Tinkom who owned the prominent house on James Avenue.  Many Syrian and Lebanese families, other than Mocol, entered the grocery business in Mankato: Shama, Isen, Shalhub, and Farho.

Joe Mocol, Sr., owned the corner lot at North Broad and LaFayette by 1930.  He opened a dry goods store in the building on North Broad adjacent to his grocery store.  In 1941 he erected a brick warehouse next to the International Harvester warehouse.  This building, 80×100 feet, had a 38×46 foot extension which could accommodate three large trucks as well as inside loading facilities.  It had a loading platform on a railroad spur.  The warehouse was intended for Mocol’s Minnesota Valley Wholesale Grocery Company.  It was Joe’s dream also to purchase all the land in the block in which Mocol’s Grocery stands for the “Greater Joe Mocol Stores.”  Unfortunately, this dream never was realized.

Joe Mocol’s family were members of Saints Peter and Paul Catholic Church.  In 1932 Joe had three new residences built side by side for his expanding family on Lafayette Street across from the store.  Sons Herb and Joe, Jr., began helping him with the store and wholesale grocery business.  Eventually, the Mocol’s acquired large trucks for use in hauling groceries to retailers.  Part of Joe’s dream of an expanded business was realized in the 1960s when Herb and Joe, Jr., opened a Mocol’s Supermarket on South Front Street across from the present Super America Station.  But this venture was not successful and the supermarket failed.

Joe’s store was the object of at least two robbery attempts in its early history.  On May 23, 1929, thieves broke into the store very early in the morning and carried away a cash register.  The register was found about 6:30 in the morning by engineers at Franklin Junior High and Grade School.  Joe, who lived above the store, said he went to bed about midnight, the store having been open until 11 o’clock.  About $30 in cash was lost.  The other crime was much more serious, occurring on Saturday night, November 28, 1936.  A gunman held up the 14 employees of the dry goods and grocery store, demanding the cash receipts.  Luckily, Joe’s mother, Mary, had just emptied the register.  The robber, Bruno Sydow, a murderer, became angry at this frustration and threatened mayhem.  But he took alarm when an employee dashed out the back door, tripping over some merchandise.  Sydow fled in his car.  Joe, who was upstairs, fired three shots from the second-story window at the fleeing man.

In the mid-1990s the City of Mankato honored Joe Jr. and Herb, now a former mayor of Mankato, for their long-established business in town.  The third generation of Mocol sons now run the grocery business and they recently celebrated over 100 years in business.

Learn about other small grocery stores.