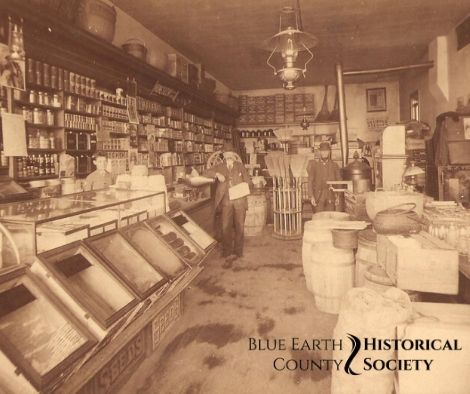 Do you remember when you could walk to the local grocery store on the corner?  Can you recall the smell of sweeping compound, or the yellow charge slips you took home?  Maybe you were a child after candy or gum, or was it the place to pick up a little gossip while you shopped?  Do names like Torrey’s across from Lincoln School, Heil’s on Madison and 5th, or Hale’s in North Mankato bring back memories?

In 1900 the Mankato City Directory listed thirty four groceries in the city, many of them on Front Street.  The stores usually carried dry goods as well, or were providers of grain and hay.  One of them was Frescholtz Grocery in the 300 block of Front Street (the site of the downtown mall).  George Otto, grandson of the owners, remembered that vinegar was sold by the gallon, syrup by the quart, and oatmeal by the pound.  Milk came from the cow out back.  Customers waited at the counter while clerks found the requested items.  Frescholtz’s opened in the 1880, and closed in the early 1900’s.

Another of the older stores, at 220 Van Brunt, was Alleman’s, called “The Little Store” by customers.  Purchased by Harry A. Alleman in 1891, it had had two previous owners.  Harry and his brother Bob, who lived over the store, kept hours from 7:00 a.m. to 9:00 p.m.  Both men always wore a hat, coat and vest, although the coat might be shed on the warmest days.  Harry wore a tie, Bob did not.  As Bob chewed, a sand-box for spitting stood beside the pot-bellied stove which was surrounded by chairs and boxes for sitting.  A few canned goods sat on the shelves.  Carrots, potatoes, cabbages and squash were kept in the basement during the winter.  In the earlier years milk came from the Alleman’s cows.  The candy counter was the main attraction for children, but Alleman’s also provided tablets and pencils for school. A walnut spool cabinet sat on top of the safe.  By the 1940’s the store stayed open only until 6:15, and Saturday night.  Canned goods were more popular and people were requesting baked goods.  However the candy counter, school supplies, and the spool cabinet remained.  The Alleman’s retired in 1945, selling the store, which remained open into the mid 1950’s.

Hilda Kettler sold groceries and gas from her one pump until the mid 1970’s.  Opened in 1926 at 905 Warren Street, across from Highland Park, there were only twenty three houses in Highland at the time. The park was a tourist park for tents and camper trailers.  Warren Street was a main highway in and out of the city, and people came in from rural areas to shop.  It was the only gas station in Highland as the college moved up the hill, and the store benefited from the college trade, until gas stations were built on Stadium.  However, the store continued to serve an abundance of children buying pop and candy, one of the most profitable items. For almost fifty years, the store was opened until 10:00 p.m., and even on Sundays.  Hilda Kettler retired in 1973.  The store was razed and the land redeveloped.

Anton’s, 615 North Front Street, closed in 1981, after almost fifty years of serving customers  It was the last of the family-owned groceries in downtown.  It opened on May 20, 1933 by sister and brother John and Millie Anton.  John died in 1956.  Millie continued to run the store, with a little help from her neighbors.  A reporter from the Free Press visited the store in 1978 and noted some of the features that made the place special to its customers: shelves built by the Anton’s father; the worn floor, swept daily with sweeping compound; bare light bulbs turned on with a long chain; a clock advertising Nash Coffee; a plain brown radio.  There was even a small meat department, and Millie cut steaks and pork chops to order, thicker or thinner.  In later years a few frozen foods and packaged mixes were added to the inventory.

The growth of supermarkets and gas station/convenience stores led to the end of the neighborhood grocery.  Today, however, they are reappearing as small, ethnic shops.