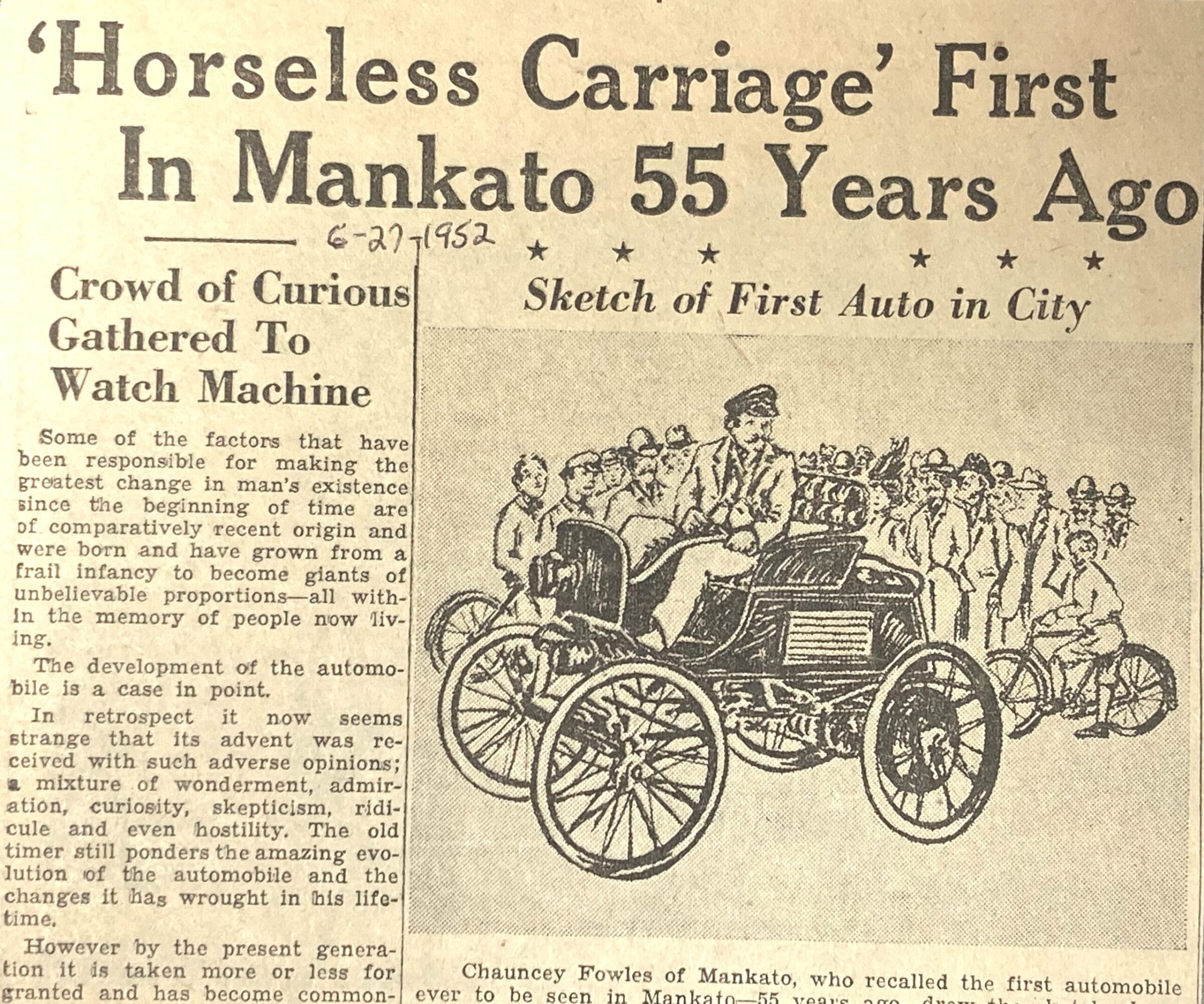 Among the first automobile owners in Mankato was C.H. (Clarence) Saulpaugh, owner of the Saulpaugh Hotel (1888-1893), manager and partial owner of the Minneapolis Baseball Club (1893-1896), owner of the Cadillac Automobile and Autocart dealership in Mankato (1904), organizer of the first Elk’s Lodge in Mankato, and President of the Mankato Baseball Association for years.  He was a civic booster whose interests ranged from baseball to hunting to theater, and beyond.  Ironically he made the headlines most extensively in 1894 when he was sued for breach of promise by Victoria Stein in a rather scandalous trial that brought crowds of spectators to the courthouse in Mankato, all men.  The Mankato Review reported on the trial in detail.  Mrs. Stein was ultimately awarded $1.00 in damages.

More pleasant headlines for Saulpaugh related his April 1902 trip from Minneapolis with a new automobile.  A two-passenger steam auto, it was described as large and elegant.  It is not recorded what the vehicle might have cost, but ads for Saulpaugh’s new dealership described the 1904 models as 150 to 200 pounds lighter than previous models and costing between $750 and $900.  Immediately following the purchase of his horseless carriage, reported The Review, Saulpaugh bought green blinds for the vehicle, and “a ‘dinky’ cap’ with a visor.”  He did not drive the car himself but rode with an operator provided by the automobile dealer.

According to rumors, Saulpaugh may have made a bet that the trip could be made between Minneapolis and Mankato in six hours.  However, a route sheet that was prepared before leaving Minneapolis anticipated a longer trip.  Leaving Minneapolis at 10:00 a.m. on April 18, he was projected to arrive at designated points every half hour, including Shakopee, Jordan, Blakely, Henderson, Ottawa, Kasota, arriving in Mankato at 9:30 p.m.  He was to be met at the Front Street Hill with a band to escort him, and his new automobile, to the Saulpaugh Hotel for a banquet.

The carefully laid-out itinerary was upset by those meeting him along the way, and offering entertainment, reported The Review.  The banquet was canceled.  When he still hadn’t arrived in Mankato at 11:00 a.m. the following morning, there was a concern for his safety.  Telegrams were sent along the route seeking his whereabouts.  A telegram was finally returned, stating he was nearing Mankato.  People with telescopes, field and opera glasses waited on Front Street until the traveler and his automobile appeared at the top of the hill, about 12:30 p.m.  The paper related that “he made a grand entrance into the city and was enthusiastically cheered along entire Main Street.” A celebration at the hotel followed.

The new automobile was kept in a building on Walnut Street.  Arrangements had been made to heat the building with steam from the vehicle.

Saulpaugh’s interest in automobiles led him to help organize the Mankato Automobile Club, and to be a supporter of the Good Roads Movement, an effort begun by bicyclists in the 1870’s and expanded to automobiles in the early 20th Century, calling for improved roads.

More about the Saulpaugh Hotel.