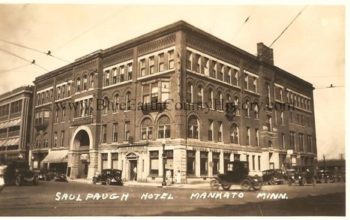 Thomas Saulpaugh got his new hotel started on June 15, 1888, when a score or more of men were put to work digging away at a foundation on the corner of South Front and Main Streets.  Saulpaugh was a construction company owner who came to Mankato in 1888 in search of quarries to provide him with stone for the railroad bridges he was building.  At the hotel site the usual crowd of “sidewalk engineers” supervised or just watched the work, according to the weekly Free Press reporter.  Originally the project was assumed to cost $100,000, but eventually, it ran to about half again that figure.  The city was bustling that summer with the hotel, the Young Men’s Insurance Building, the courthouse, the Baptist Church and St. Joseph’s Hospital, all being constructed at the same time.

When constructed, the Saulpaugh Hotel was the social hub of Mankato—magnificent four-story stone building, made of Mankato-Kasota stone.  For years, it was the largest building in southern Minnesota.  Guests of the hotel during its hey-days of the turn-of-the-century could purchase a box of cigars—“Saulpaugh Cigars,” produced by local cigar manufacturer, F.A. Bauer.  Truly glorious party days in Mankato began with the formal opening ball of the hotel on November 6, 1889.  All of Mankato’s society and many from surrounding communities attended the affair and so many were present that not all the people could be seated at one time for the seven-course dinner.

Prominent persons stayed at the hotel over the years:

Minnesota Governor William R. Merriam was at the formal opening of the hotel.

The Saulpaugh was featured in a Walt Disney cartoon in 1944.  Donald Duck was hanging towels that he had taken from various hotels out on a line.  One towel said “Saulpaugh Hotel.”