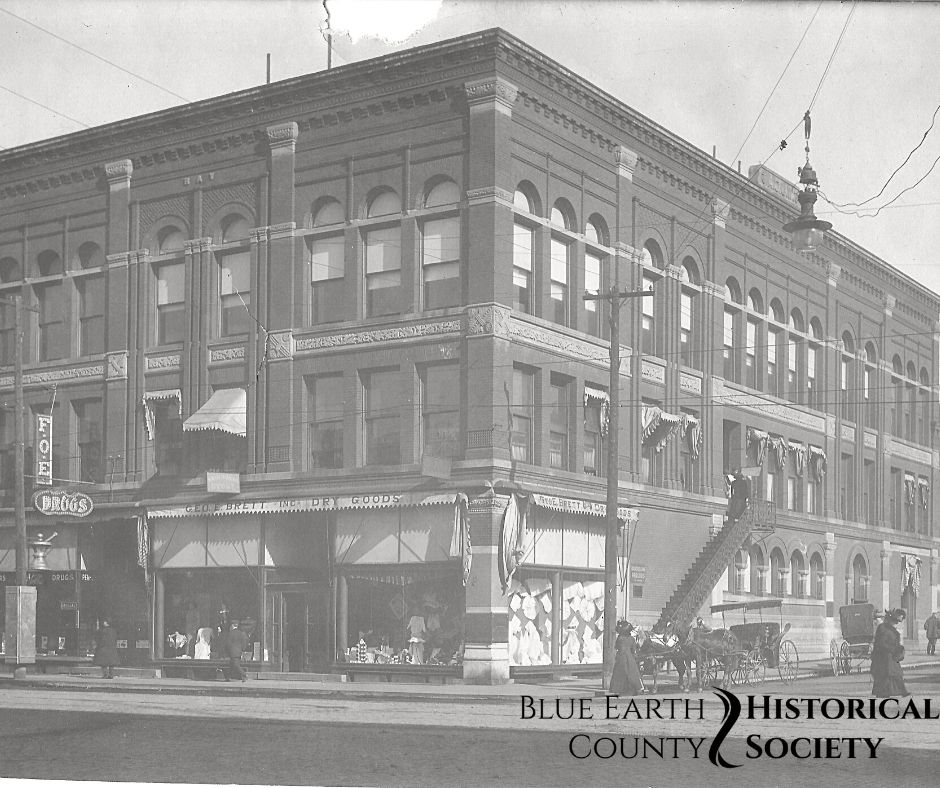 Brett’s Department Store was one of downtown’s largest and most popular during its long lifetime, 1868-1991.  Opened as George E. Brett Inc. in 1868 by its namesake, who had come to Minnesota in 1863 from Maine, the store was located on the corner of South Front and Jackson Streets. In 1893 R. D. Hubbard sold the Northeast corner of the street to Brett for $11,000 and its new location was 329 South Front Street.

In the 1910s and 1920s, the store expanded. Brett’s purchased the entire three-story building they rented. Between 1893, when Brett’s occupied the first floor of the northeast corner of the building at Front and Jackson Streets, and 1915, when they purchased the building, Brett’s expanded onto the other two floors in the building. In 1926, the store added basement departments in both their Mankato and Albert Lea stores.

Brett’s was a family-run for the duration of the store’s life. George Brett opened the store in 1868 and handed it over to his son Edward in 1915. The store then passed to Brett Taylor, Edward Brett’s nephew, in 1958. His son, Brett Taylor Jr., became the president of Brett’s in 1971 and he ran the store until 1990, when his son, Scott Taylor took over the company. A Brett or a Taylor could always be found around the Mankato store.

In 1991, Brett’s changed its name from Brett’s Department Store to Brett’s Specialty Store. The specialty store dropped several departments that did not have good sales, such as housewares and home products, as Taylor prepared the store for the 1990s.

The 1991 holiday season was hard on the store, and they did not make a profit. A couple of things combined to negatively affect the store’s sales: the United States was going through a recession, and River Hills Mall had opened in Mankato.  Unlike other Front Street stores, Brett’s chose not to move there due to the high cost of the rent. The River Hills Mall led to a shift in the shopping center of Mankato. Soon after the Mankato and New Ulm stores closed, Brett’s also closed its Owatonna store. Shortly before the Owatonna store closed, Taylor announced that all Brett’s stores were going to close. Taylor, in an announcement about the closing, stated, “We’re losing money.”