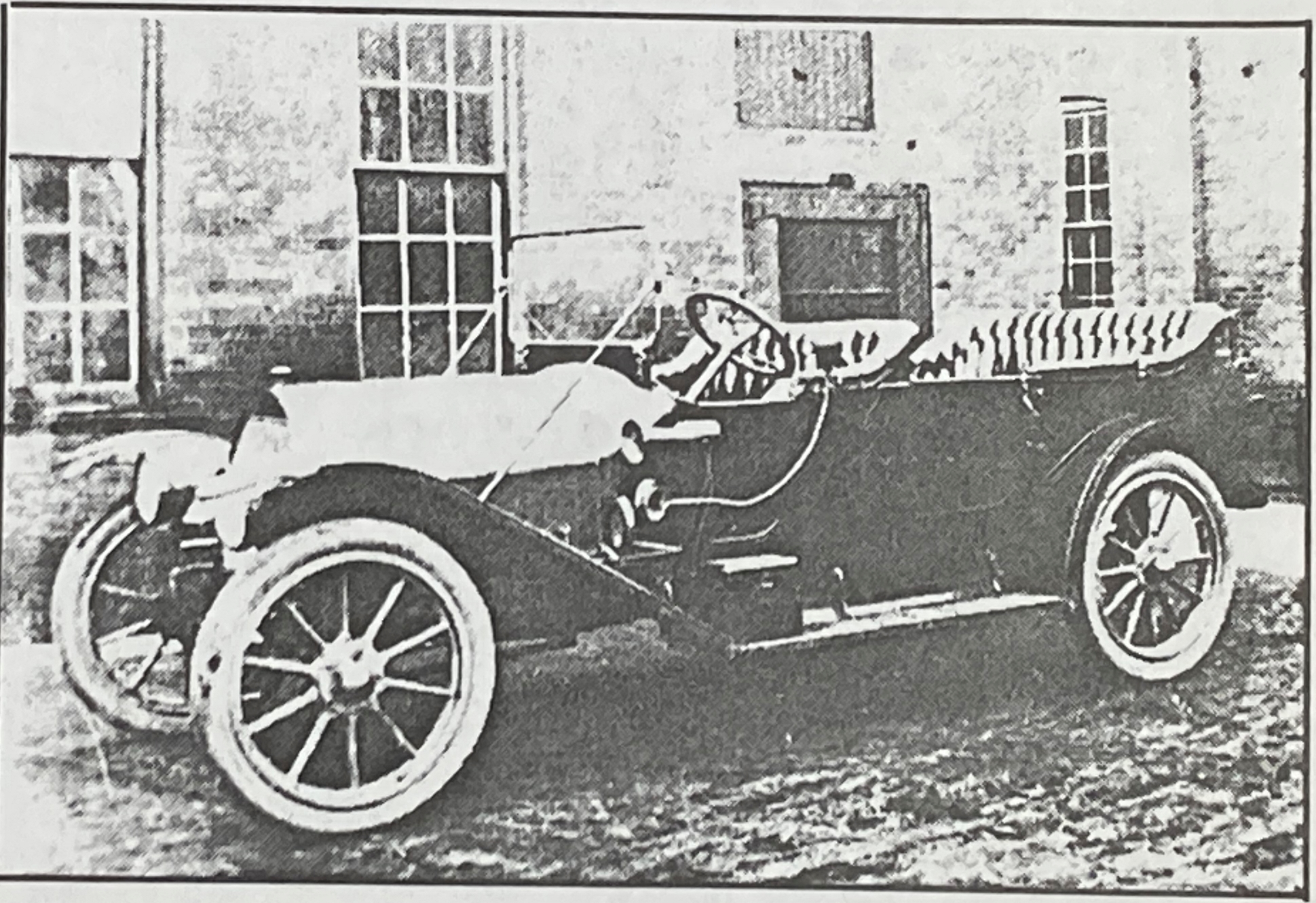 The first factory-built horseless carriage in Mankato was probably a Stanley Steamer that arrived by rail in 1897.  When the steam was up, the crowd which had gathered to watch it be unloaded witnessed the car driven at speeds of six to eight mph, followed by curious boys on their bicycles.  However, the first homemade car in Mankato, built by Charles Eckman, came even earlier.  Eckman, who worked for the Omaha Road Railroad built and operated the first internal combustion hand car in the country in 1897.  It is reported he also built an automobile, using bicycle tires.  Although the railroad used his design for the hand car, there is no record the automobile created much interest.

Eckman had the cylinders for his invention cast at the Mayer Bros. Foundry (126 W. Rock St).  It is possible Louis Mayer used Eckman’s designs when he built an automobile with a V-8 engine and gears instead of a chain drive.  The whole shop worked on the car during winter and slow periods, beginning in 1903.  The invention finally made its appearance on the streets of Mankato in 1906.  Mayer’s car is considered the first V-8 engine built in the United States.  The  70 or 100 horsepower engine, (depending on whose report you read), was four feet long   The car used 30-inch tires, with coil springs on each wheel.  The body of the car was constructed of wood, made in Detroit following the designs that Mayer sent.  Its shiny black body was credited to the twenty coats of paint that were applied, each coat then rubbed with a pumice stone.  Its wheels were painted yellow.  It could hold seven people plus the driver.  The automobile was dubbed “The Titanic” for its size, or “The Mayer Special.”

Mayer’s first challenge was the Main Street Hill, unpaved and steeper than today.   “We made the hill like it wasn’t there,” reported John Theissen, who was one of the passengers taken along for ballast.  Having passed the first test, Mayer conquered other hills in the area, including the LeSeuer hill which was considered one of the worst in the state.  The car could go 65 mph for short distances.

Mayer apparently built the car simply to prove that he could, and the novelty soon wore off.  The car was sold to two of Mayer’s workers, who later moved out of the area.  To prove that the motor wasn’t a fluke, Mayer built two more V-8 engines for a friend who used them on boats on Lake Minnetonka.

The Mayer brothers, Louis and Lorenz, held patents for springs for automobiles, a rotary road grader, a four-cylinder gasoline-powered tractor, and its best selling item, a trip hammer called the Little Giant.  Good innovators, they were not good businessmen, and the Mayers lost the company in 1915, which at one time was the largest foundry and machine shop in Minnesota.

Not everyone was as enamored by the new horseless carriages as these inventors.  July 24, 1903, a state law was passed giving horse-drawn vehicles the right-of-way.  Cars were required to have bells and lights to warn of their approach.  Speed limits were 8 mph in town and 25 mph on highways.  Barely a week after the law went into effect, the first fine of $13.65 was given in Mankato for driving over the speed limit.