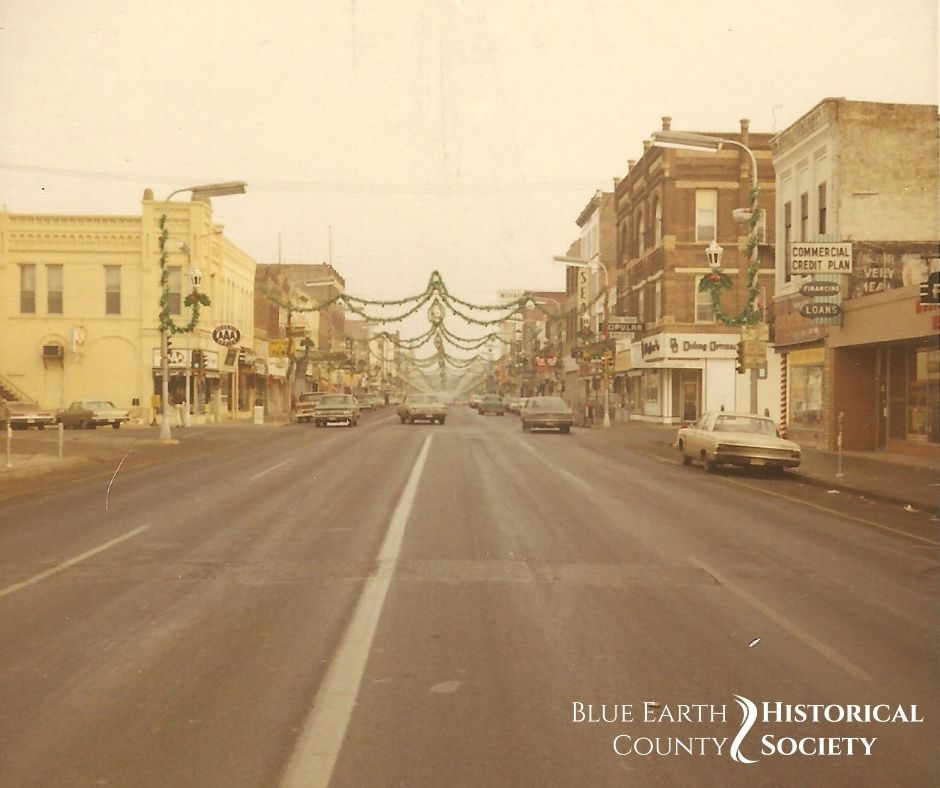 For decades, Mankato’s Front Street lights signaled to everyone the holiday season had arrived.

On Friday, November 30, 1941, Front Street between Main and Cherry was lit up with a new Christmas display, described as “one of the most beautiful layouts obtainable.”  Garlands of evergreen and colored lights crossed the streets, each set off by lanterns and a star in the middle.  The lighting began the holiday shopping season, and it was hoped would bring many to the city.  Stores that had previously decorated their fronts with colored lights refrained from doing so to not detract from the street lighting.  The retail division of the Chamber of Commerce, chaired by E.F. Rogers, was instrumental in acquiring the new lights.  The lights were declared “a great and immediate success” by the Monday Free Press.

However, 1941 was not the first year the Chamber of Commerce tried a special Christmas display to attract shoppers.  The November 22, 1927, Free Press interviewed J.E. Brett who was chairman of the retail trade committee of the Chamber.  He spoke of the Christmas trees that were being placed about 20 feet apart, in front of buildings, along the street.  Although the news article described the trees as eight feet wide, it did not elaborate on their decorations.  It can be assumed that they were decorated and lighted.

The 1950s were the peak of street lighting, but they gradually disappeared from the pre-Christmas scene.  Downtown Mankato continued to display Christmas lights until 1979.  By then the shopping areas in Mankato had grown, and the city got too big to decorate.  As Roger Nygaard, Chamber President said, “The coming of the malls changed the decorating situation,” and outdoor displays in commercial areas had gradually disappeared.  The downtown display had aged and would have been expensive to replace, and the energy crunch of the mid-1970s led some to consider too many lights as unpatriotic.  In fact, a note in November 1973, City Council minutes proposed that “in the interest of conserving energy the downtown Christmas decorations remain unlighted throughout the holiday season.”

The interest of the city turned to other projects, such as the blocks of lighted homes along North Broad and Mary’s Circle.