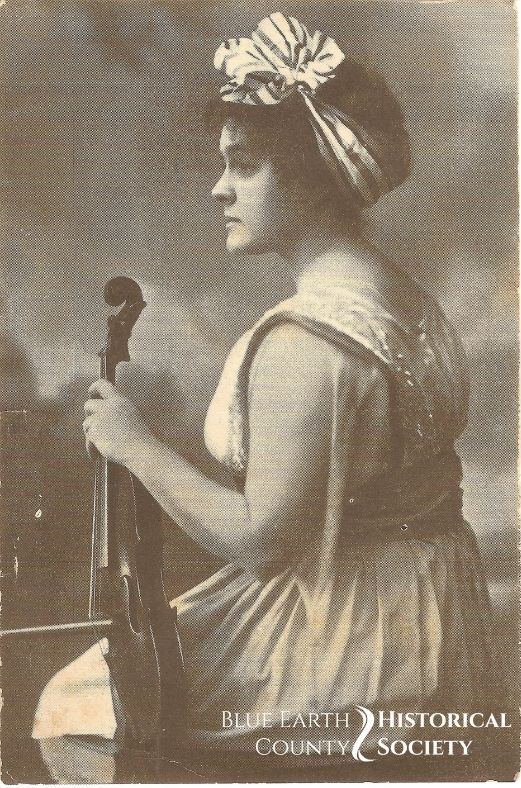 Mankato has been blessed with some considerable musical talent over the years, most of the soloists being women.  Minnie Hubbard was one of Mankato’s best musical stars.

On January 10, 1883, in Mankato, Minnie C. Schoyen was born to Mr. and Mrs. Emil Schoyen.  She began to study violin at the age of seven with her father, a pianist who had been educated in Europe.  Minnie attended Pleasant Grove School (located at the present site of Lincoln Community Center on Byron Street) and then Mankato High School on South Fifth Street.  Minnie attended the New England Conservatory of Music in Boston where she was trained by internationally known concert violinists.  Graduating from the Conservatory on June 13, 1902, she returned to Mankato and married Jay Hubbard, son of R.D. Hubbard, on October 1 of this year.

Two sons were born to this marriage: Rensselaer D. and Dean.  In November 1903 the young Jay Hubbard family purchased a lot at the corner of Lincoln and Center Streets.  Immediately they built a house there, costing $3500.  A month later the baby, Rensselaer, died at only four months of age.  The funeral was held at the new home.

Minnie continued her career as a violinist giving frequent concerts. She played at many free concerts for the Red Cross at Fort Snelling during First World War.  She once played at the National American Festival.  During her musical career, Minnie had a total of fifteen phonograph records cut featuring her violin solo work.

Minnie’s talents were not only musical; she was an astute businesswoman.  She was the first woman in Mankato to buy and sell real estate and she erected buildings on her various properties.  Minnie’s first land purchase, in 1916, was a lot on South Broad Street next to the Butler property.  Her most spectacular venture was the “Woodland Avenue Texaco Station of West Mankato.”  Minnie designed an ultra-modern filling station at the corner of Woodland Avenue and Front Street along the lines of the Ann Hathaway cottage in England.  This 1931 structure was the third building to be erected on Woodland Avenue by Minnie.  Limestone paved the driveway.  There were four gasoline pumps and an electric clock on the outside of the building.  A composition roof in red-brown slate effect, arched doorways, and window boxes completed the décor. Needless to say, this was the most spectacular gasoline station in town.

Minnie lived with her son Dean at 313 Byron Street in later years.  She was hospitalized for three weeks with cancer in late 1960 and died December 15.  Minnie was buried at Glenwood Cemetery.