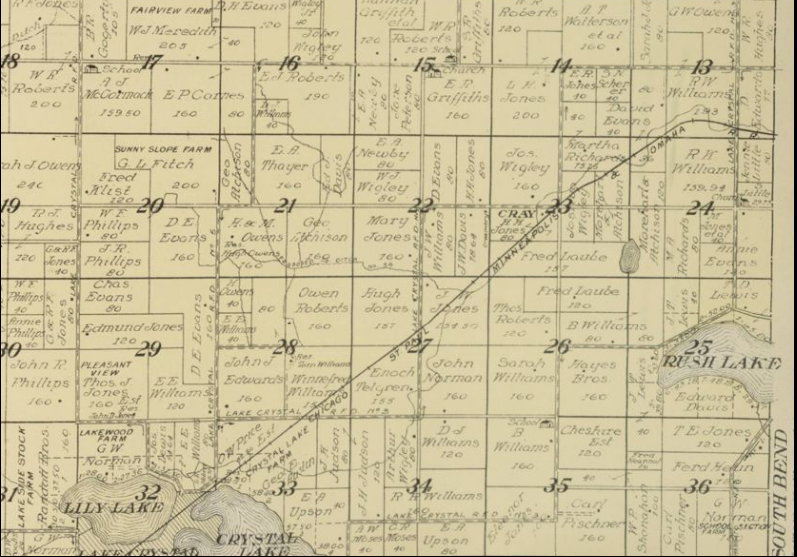 Whoever thought of moving a 40 ton, 20,000-bushel capacity elevator along country roads, and across a narrow bridge over a dam?  But that is what happened in August of 1949 when the Hubbard and Palmer elevator at Cray was moved eight miles to Rapidan.  It replaced an elevator that had burned the previous winter.

The town of Cray probably is unfamiliar to people, unless you lived along the Omaha Railroad line west of Mankato.  An attempt was made to build such a town on Minneopa Creek in 1906, nine miles southwest of Mankato, about four miles east of Lake Crystal.  Located in Judson Township, the area was also known as the Owens, Roberts, Little, Hughes neighborhood.  Cray was named either for Judge Lorin Cray, who was once the attorney for the railroad, or for his brother, Nelson, who was claim agent for the Omaha line.  It was anticipated that Cray would become a bustling community.  The Lake Crystal Herald wondered if the town grew how much competition it would bring for businesses in Lake Crystal and even Mankato.

The dream of Cray was little more than a plank crossing when it was listed on the timetables of the Omaha Railroad in November 1906.  A ticket from Mankato to Cray cost twenty-seven cents.

The hoped-for town probably got its most attention when a boxcar derailed there a month later.   Trains needing to use the line were stopped for three hours, temporarily making Cray into an unanticipated metropolis!  Judge Cray, surely tongue-in-cheek, sent a telegram to officials of the Omaha line, saying “To avoid accidents don’t run trains by important stations.”

There is little evidence that Cray was ever more than a creamery, an elevator, and a stop for trains to load or unload shipments, including corn, lumber, and even the stock, machinery, and household goods of a Mr. Moody of Iowa who moved to the James Farm in March 1914.  A petition circulated in 1914, was still asking that a depot be built.  Social Notes were published in the Free Press until 1919, reporting on comings and goings of people in the area

The final mention of Cray seems to be moving its elevator to Rapidan.  William Reese from Thief River Falls, a specialist in moving grain elevators, balanced the 65 foot, 24 by 24 feet building on twenty-four wheels and moved it down a gravel road, then onto Highway 169.  Observers described the sight as resembling “a lone spider-like truck” pulling what appeared to be a mountain.  At Washburn’s Corner (Hwy. 169 and Co. Rd. 9) the monstrosity turned toward the Rapidan Dam.  It was a three-hour trip from the intersection to the bridge.  The challenge then became crossing the dam where the structure needed to be raised an additional two feet to pass over the bridge railings.  A crowd of nearly 2000 people watched as the elevator inched across.  The Free Press published a picture of the building seemingly balanced on the bridge in its August 2 issue.  The elevator still needed to be pulled up a steep hill, and another two miles into the town of Rapidan.