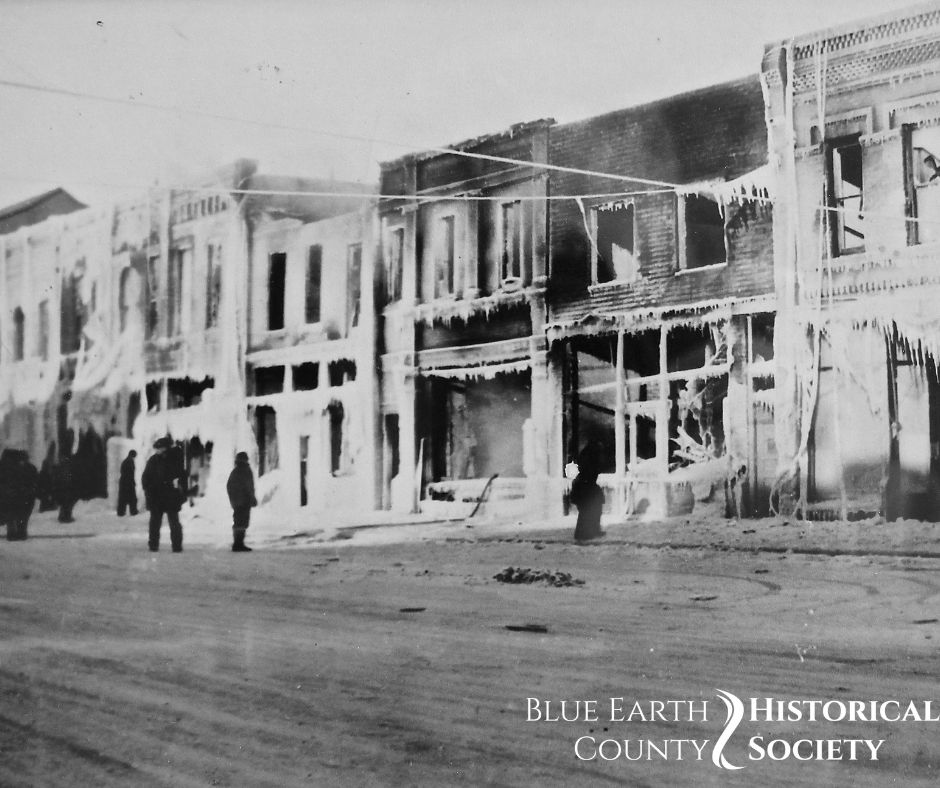 Fires seem to have beleaguered the city of Amboy over the years.  In 1909 the High School was gutted by an early evening blaze.  The alarm was raised at 9:45 p.m. on April 26.   Worsen by strong winds and a dramatic drop in temperature, the walls of the building still standing were ice-coated by the time the fire was extinguished. The school year finished with classes held in the churches and the Odd Fellows Hall.  The school was rebuilt, using the old walls, and was ready for classes by the fall, 1910.

Fire destroyed the Mel Loverude Implement Business and Stevens Motor Sales on December 27, 1951.  That fire started in the heating plant for the building which housed both businesses. The fire was discovered because of the abundant smoke coming from the chimney, which was followed by an explosion.  Amboy’s newest fire truck froze up, but the old truck continued to work.  The Implement Dealership managed to save two new tractors but lost all the parts and the invoices that had just been completed but not put into the safe.  Steven’s Motor lost several new and used tractors and parts.  Some trucks in for repairs were either lost or damaged also.  Luckily they did not have any new Ford cars on hand.  Steven’s Motors rebuilt in the same location.  Loverude moved to a new building just off of Maine Street.

Rob’s Fairway Food Store was gutted by fire the evening of November 3, 1977.  The fire was believed to have started in the back of the building.  Bystanders were put to work, helping to move furniture out of Graf’s Home Furnishings in the adjourning building.  After the fire, area churches arranged times to transport people to Winnebago for grocery shopping.  The Fairway Store also opened a temporary small business in the back of the Legion building.  The store was rebuilt behind the burned outbuilding.

The fire of January 4, 1940, out-blazed them all, damaging half the buildings on the north side of the main commercial block.  The fire began about 2:00, on a Thursday afternoon.  Some reports said the cause was from seepage of gas or a pocket of sewer gas, others that the oil heater exploded in the gun repair shop at the rear of Kienitz’s Barber Shop.  Hugo Kienitz, working on a gunstock in the shop, remembered striking a match to light his pipe. The blast was heard four miles away, cracking or breaking glass on main street buildings.  Kienitz was the only injury of the day, although his wife, who was in the apartment above the store, had her glasses broken and sustained some cuts on her face when the blast blew a hole through the floor.  Dr. H.O. Morgan was one of the first on the scene.

It took some time for news of the fire, and calls for help, to reach surrounding communities as The Willow Creek Telephone Company, located over the drug store, was an early casualty of the blaze. Telegraph was used, as well as a drive six miles to Vernon Center to summon help by phone.  Firemen from Mapleton, Vernon Center, Winnebago, Lewisville, Truman, Good Thunder, and Mankato responded.  The Amboy fire department had responded that morning to a fire at the Hi-Way Inn in Vernon Center.

Some eggs and other items from the grocery store, as well as boxes of dynamite from the hardware store, were carried to the depot.  When the fire reached the hardware store, it was renewed by the explosion of shotgun and rifle shells and paint.  The city’s water tank was soon drained, although the system could continue pumping 450 gallons per minute.  The large pumper truck from Mankato could work only to a fraction of its capacity because of the limited water.

Working in sub-zero temperature, only three fire hydrants were operable, the others being frozen.  Firemen’s mittens often needed to be cut off and coat sleeves “broken” from the ice built up on them.  Many of the firefighters suffered frostbite and even frozen fingers.  A place to warm up, and hot coffee, was quickly arranged by the Rebekah Lodge at the Odd Fellows Hall across the street.  Town’s people provided food.

The fire destroyed the Paul Youngdahl Jewelry Store, Torgerson Drug Store, John Roerig Hardware Store, and Shultz & Minse Pool Hall.  There was damage by smoke and water to Torgerson Grocery Store, Ed Schwartz Harness Shop, the post office, ten apartments, a beauty parlor and the W.E. Schmidt Loan and Insurance Company.  All buildings were at least partially covered by insurance.  The total loss was estimated at a quarter-million dollars.  Compare that number to the Madelia fire on February 3, 2016, similar in also destroying a portion of a main street, and being fought on an extremely cold night.  State aid alone was over one million dollars.