The Short Life of the Mankato House Hotel

The Short Life of the Mankato House Hotel 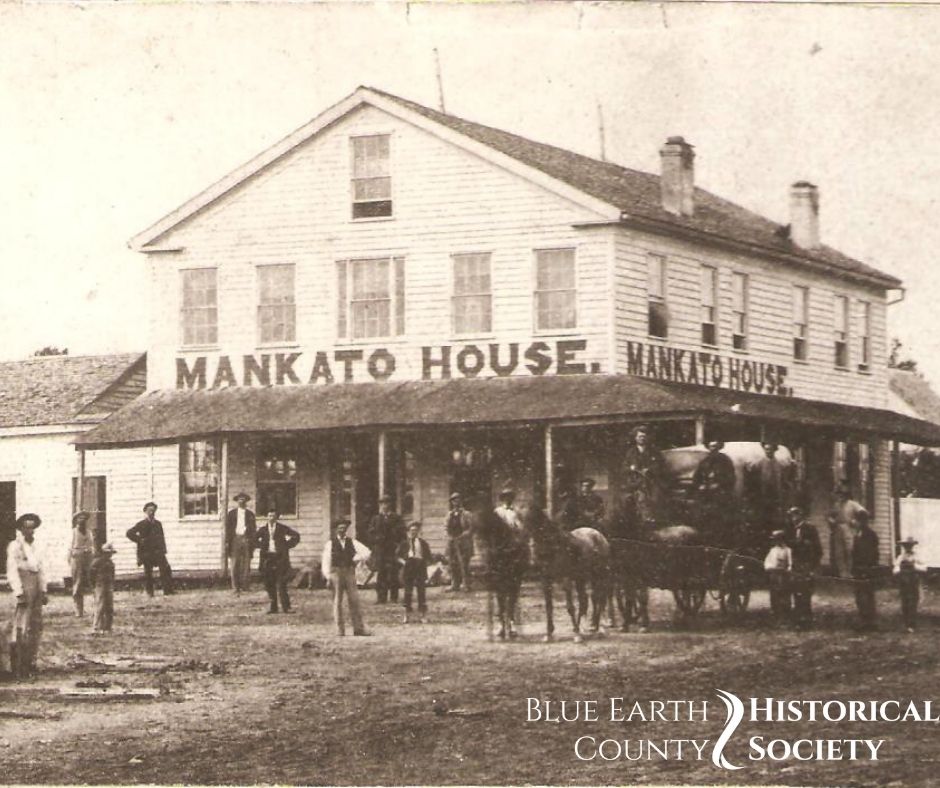 The first bona fide hotel in the city is considered to be the Mankato House at South Front and Hickory, opened in 1855.  However, earlier pioneers may have stayed at the Mankato City Hotel, opened in 1853 by Edwin Howe, the first sheriff of Blue Earth County.  Located on what would become North Front, it provided minimal housing and guests needed to supply their own bedding.  Men slept in the attic, women on the lower floor.

Mankato House offered more services, becoming the place for social and political gatherings in the city.  It was two stories high, thirty-two feet by fifty feet, with a one-story addition for the proprietor’s family.  The millwork was done in St. Paul and shipped by boat to Mankato, along with the men to do the building.  Henry Shaubat purchased the building before it was completed for $1200, and had the first story plastered.  However, he left the second story as one large room, called “the school section,” which became the sleeping quarters for stage drivers, teamsters, and guests when the hotel was full.  The hotel opened with a grand dedication on July 5, 1855.  A July 12, 1859 advertisement in the Record noted that the hotel had been refurbished and “the chambers are neatly furnished and comfortable.”  Rooms would be available to permanent borders or travelers.  Meals “will be provided, at all seasons, with the best the market affords, and the chambers are neatly furnished and comfortable.”

Grover C. Burt purchased the business in 1864, and rebuilt the structure in 1870, adding a three-story brick addition in 1881.  It became the place to dine in the city.  The editor of the Mankato Record Weekly mentioned in 1873 that “The enterprising landlord of the Mankato House, G.C. Burt, has just received a fine lot of silverware, consisting of sugar urns, creamers, butter dished, and syrup mugs – 35 pieces in all, valued at $200.”

Another note in the paper reported that “G.C. Burt, our host at the Mankato House, has our thanks for a delicious breakfast of silver skin eels on Wednesday last.  His boarders have no reason to complain of the fare furnished them.  Grove is too fond of good living himself to starve his guests.”   An extensive menu for Sunday, March 23, 1879 lists thirty-eight entrees, including: baked California salmon, leg of veal, blue-winged teal with jelly, fresh bay lobsters, or spiced buffalo tongue.  For dessert, there were thirteen kings of pie, puddings, cakes, fruit and nuts, and even ice cream.  The menu was simpler during the week, with the meal costing 37 ½ cents in 1883.  Guests paid $2.00 a night for a room.

Newer hotels were being built, including the Saulpaugh (1889), which became the area’s center of social activities.  The last meal was served at the Mankato House on March 24, 1890.  The building was sold four days later for $80.00, to be torn down.