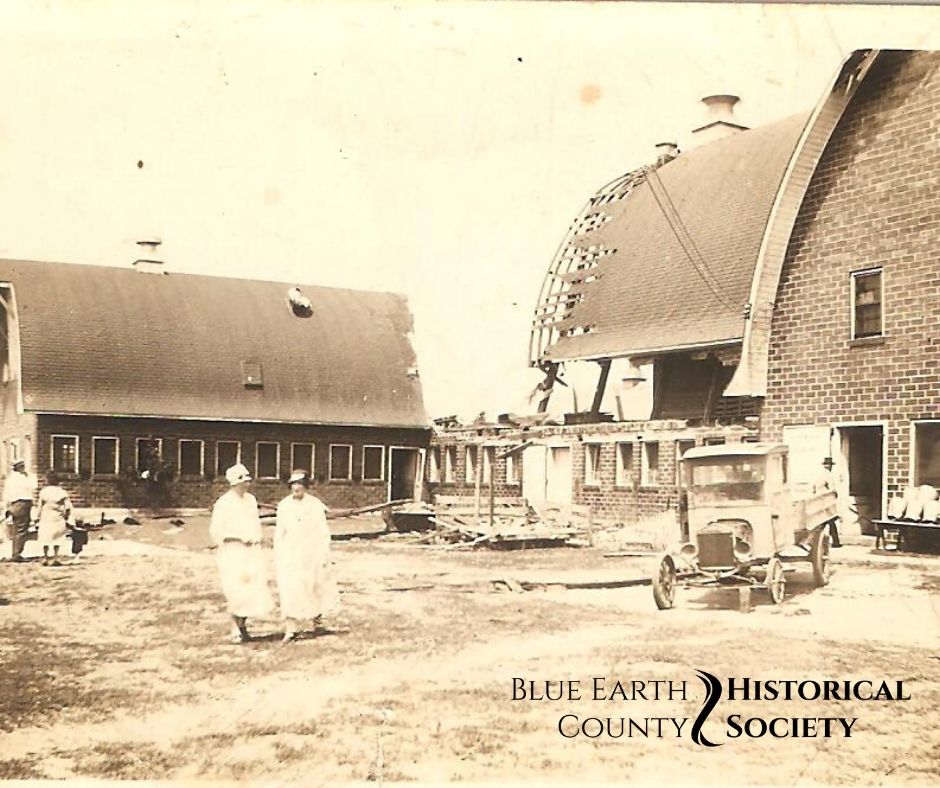 J.C. Marlow arrived in Mankato in 1914, an eager young man with a job to do, selling dairymen on the usefulness of milking machines.  Coming from Platteville, WI, he had been milking forty cows and knew about the machines, particularly the Hinman Milking Machine.  That model had only two moving parts and could milk 20-25 cows in one hour, thus cutting down on hard-to-get hired help.  “How would you like to have a helper in your diary to do the milking who would always be on the job and NEVER GET TIRED” exclaimed the Sales Manual. The machine was cleaner, more sanitary, and not as hard on cows as hand milking.  It was so simple, it was said, that a young boy could use it if he could carry the pail.  Marlow set up the distribution headquarters for Minnesota and the Dakota for the Hinman machine at 508 S. Front St.

Having become a successful supplier of milking machines, Marlow returned to milking, and to breeding Holsteins.  In partnership with W. W. Randall, a barn was built in Lime Township that would hold 100 head of cattle, with additional pens for cows, calves, and bulls.  Completed in 1920, at the cost of $40,000, the barn was constructed of glazed tile hollow block.  There are conflicting reports of its size, perhaps depending on how one measured the rooms off the main part of the building.  It was 38 feet by either 162 feet, or 210 feet, with twin silos that each held 350 tons.  In the south wing were a boiler room, dairy room, office, and lavatory with showers.  Two stories of sleeping quarters were built above.  There was a root cellar under the silage room and granary above.  The haymow was reported to hold 10,000 bales, or 40 tons of hay.  Feed was mixed and sent through a hopper into feed roughs, an automatic electric pumping apparatus provided fresh water, and there was a modern ventilating system for the entire barn.

Marlow and Randall formed a corporation in 1922, known as Mankato Holstein Farms, with several Mankato businessmen as stockholders.  Along with breeding and developing purebred Holsteins, theirs was one of the highest milk producing herds in the United States.  Cattle shown at National Diary Shows and State Fairs were consistent winners.  Sir Pietertje Ormsby Mercedes 14th, a bull weighing 2750 pounds, was considered by many to be the greatest show bull that ever lived.  Marlow also served as a State Director of the Minnesota Holstein Breeders Association and organized a South Central group.

Although Marlow had been successful selling Hinman milking machines, in 1947, at age 70, he founded his own company, the Marlow Milking Machine.  It was promoted as a machine that would “eliminate the cause of mastitis and increase the quantity of milk and butterfat” in cattle.  The company continued in operation even after Marlow’s death in 1955.

The barn survived through a tornado in the 1930s, a fire started by lightning in the 1980s, and several owners.  It was put on the National Register of Historic Places in 1980 as “one of the most imposing agricultural buildings in the region and as a link with an important dairy cattle breeding operation.”  Badly in need of repairs, a section of the roof collapsed in the 1990s.  Repairs at the time would have needed 18,000 square feet of shingles, at a price of $40-50,000.  On May 13, 2006, it took just over an hour for the building to be demolished, leaving a part of the history of Blue Earth County agriculture in rubble.