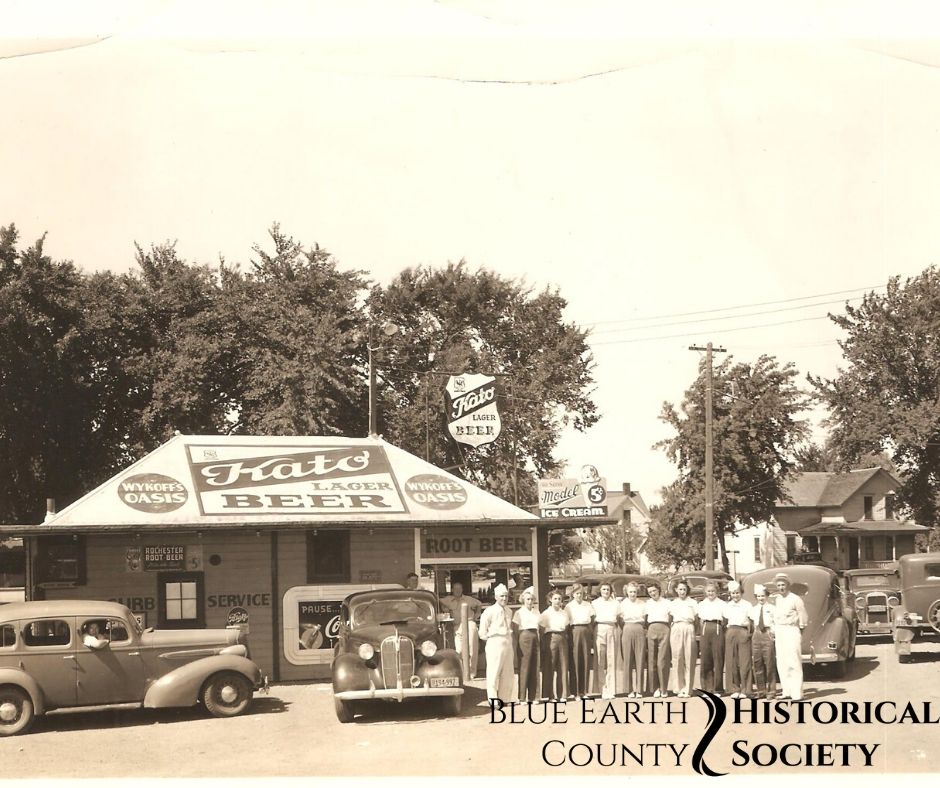 Clyde Wykoff, the proprietor of Wykoff’s Oasis Drive-In in West Mankato, opened his drive-in in 1931, during the beginning of the Great Depression.  There were no drive-ins in the Midwest at the time, although they flourished in the South and in the West.  Clyde got the idea from a drug store in South Bend, Indiana, that had a girl out on the sidewalk serving malted milkshakes to customers who drove up in cars.

Mankato had a population of about 18,000 then, but at certain spots in the city traffic was heavy.  Clyde and his wife surveyed critical spots for locating their business by counting cars.  They decided on a wedge-shaped corner lot at Sibley Street where US Highway 169 and State Highways 60 and present 66 cross.  It was just two blocks from Sibley Park, which attracted thousands of visitors each Sunday (visiting the Zoo).

Their first building was a small 12 by 16 feet –with a counter in front and a room in the back for ice and equipment.  He decided to handle only root beer because of the big margin of profit.  However, he soon discovered that not everyone takes to root beer, and added other soft drinks, ice cream, candy, and cigarettes.  When Prohibition ended in 1933, Kato Beer was added.  Toward the end of the first summer, Clyde added sandwiches.  Hamburgers didn’t work well for curb service.  Sandwiches sold for a nickel in 1931, rose to ten cents until 1940 when he raised the price to fifteen cents.  Soda pop was a nickel.

The drive-in opened every day from 10 a.m. to one o’clock the next morning, from April to November 1.  In bad weather, Clyde stayed open since a customer who finds the business closed won’t bother to come back.  Clyde had a musical stand built on the roof, and every night from eight until eleven o’clock, and on Sunday afternoons, a three-piece orchestra played.  Wedding receptions were popular here.  The Oachs family band played much of the time.

During the busiest part of the summer, Clyde employed 13 girls and one man, up from three girls in 1931.  They were paid 16 cents an hour plus tips.  This gradually increased to 30 cents an hour in the 1940s.  The head carhop got $25 a week.