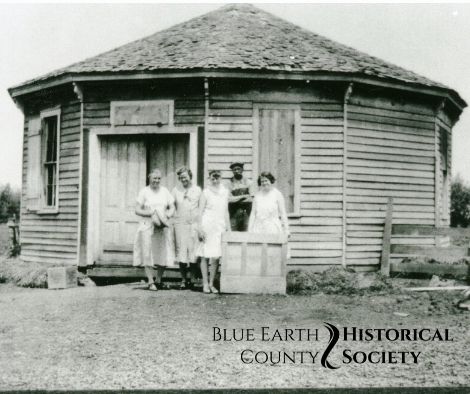 The architecture of round barns is often traced to a Shaker community in Hancock, Massachusetts, built in 1826.  However, this was a stone structure, and the only one built.  The second half of the 18th Century saw a number of octagonal barns.  But the true circular barn, built of wooden slats, did not become popular until the early 20th Century.  Round barns were advertised as more efficient, inexpensive and structurally sound.

A round barn gave greater volume-to-surface ratio, and thus used fewer materials, claimed advocates.  Structural supports inside the building were not needed, leaving more open spaces without posts, and providing more storage. Built on a stone or concrete foundation, the silo would be located in the center of the building, with animal stanchions around it, thus making feeding much easier.

There are memories of three such barns built in Blue Earth County in the 1910s.  John Goff had such a barn erected. six miles south of Mapleton, in 1911.  The plans for the structure came from F.L. March who wrote for the Farm Stock and Home Magazine. John Brunsvold of Amboy oversaw the construction.  The first floor was built of hollow tile, helping warm the building.  The flooring was cedar blocks with cement filling, which was warmer and better for the feet of the animals. It stood 220 feet in circumference, and 75 feet at it’s highest.  There were stanchions for twenty cows, and room for fourteen horses, plus three additional box stalls.  A harness room and a workroom were also found on the ground floor.  The loft contained a bin that held 800 bushels of oats, a 40-gallon barrel water tank, and room for 200 tons of hay.  There were four chutes for hay, and four for straw.  A hay track ran around the loft, and also across the center.

The Bartlett Round Barn, located on Highway 34 in Rapidan Township, was built by George Bartlett in 1911.  A local carpenter, George McComder, drew up the plans.  The foundation was poured concrete, the upper part lumber cut on the farm.  50 feet across, 30 feet tall, there was a cupola on the peak.  The first floor could hold twenty dairy cows, with separate pens for calves.  This barn was termed a basement barn, built on a sloop so that horses or tractors could drive into the loft on the north side.  The Shaker barn, it was said, had no corner for the devil to hide.  Bartlett claimed there was no corner for the rats!  The barn was taken down sometime in the 1990s.

The Fleming Round Barn stood in Garden City Township, just off Highway 169 and County Road 113.  Lester Fleming had the barn built in 1915 by a Vernon Center construction company, Johnson Brothers.  The idea for the construction came from a University of Minnesota bulletin which called round barns “efficient for feeding.”  It was also a basement barn, built on a slope with the north side allowing entrance to the loft.  The silo in the center was sixteen feet across, and twenty feet higher than the roof.  It was removed while the barn was still in use since wind against it had damaged the barn.  The lumber was western pine, from Hubbard and Palmer Company which owned grain elevators that became Hubbard Milling.   There were thirty-four stanchions around the silo, a milk room, and feed mixing room on the lower level, and feed bins in the loft.  The barn was used for dairy until 1940.  The barn was taken down in the fall of 1990, after being damaged in a summer storm.

Round barns were difficult to build and maintain.  The wooden strips used for the siding would easily spring away from the frame.  They were difficult to light and ventilate.  The claims for efficiency were overstated.  The center silo could be hard to fill and, though feeding might be easier, removing manure was more difficult.  Although it might be harder for the devil or rats to hide in a round barn, it was also more difficult to fence in escaped animals with no corners to trap them.  The round barns of the early 20th century were built for horses, not for the size of modern machinery.

While round barns can still be seen in Minnesota, they may have become antique shops, event centers, or historical sites.