The Circus Comes to Town

The Circus Comes to Town 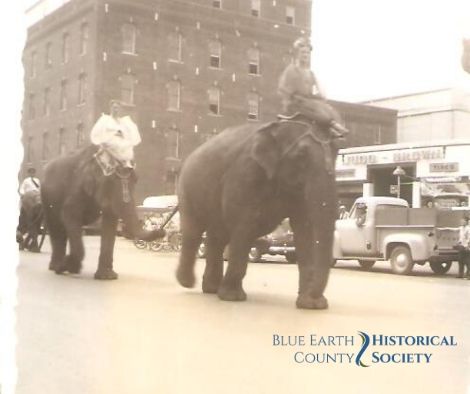 Many of us remember that in the hot summer days the Big Top appeared in Mankato. Perhaps we still see something of this sort of thing when a carnival makes an appearance or trapeze acts appear at the County or State fairs. But, the appearance of those huge, brightly colored posters telling us that in a few weeks we would be visited by “the Greatest Show on Earth” sent a thrill into our lives.

Finally, when the big day arrived, very early in the morning, special trains, containing mammoth cars, silently eased into our city. The avid circus goer got up before dawn to see the process of the unloading at the Pike Street area near Gamble Robinson Company. A beehive of activity saw the parade form—animal cages, plodding elephants, camels, and horses–, then the procession slowly wended its way up to Front Street north to the old Mankato Fairgrounds where the Kato Ballroom now stands. The fevered activity now really began as the tents magically rose all over.

All this first appeared in Mankato in 1878. Usually, we saw Ringling Brothers Circus of Baraboo, Wisconsin, which started its operations on May 19, 1884.   They gave a show at the old Harmonia Hall, located in the 200 block of South Second Street where Wells Fargo Bank now stands. The story goes that Al returned to Mankato and worked for a time as a harness maker at the William Walker Harness and Saddlery Company on South Front Street.

Naturally, the circus located where there was lots of room—for the Big Top and all the sideshows, but also where lots of free parking was available. The first Ringling show in Mankato set up at the corner of Second and Cherry Streets. Often, West Mankato was used, Schindle’s Field in East Mankato, the Pleasant Street Slough, to name a few places. Some other early shows were Hagenbeck Shows, Cole Brothers, Barnum and Bailey. But now the fervor of the “sawdust trail” is largely only a memory.