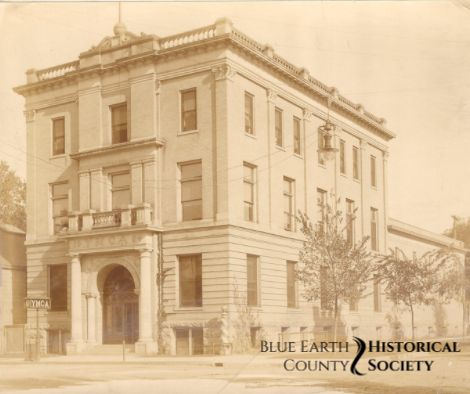 What if you lived in Mankato in January 1900?  Organized clubs may be your answer. You had just celebrated the beginning of a new century, and there was general optimism.  The population of the city was approximately 15,000 and growing.  There were four newspapers (one in German), a library, a bowling alley, and an opera house.  But the winter was cold, and snow-covered most roads.  There were no heated cars to take you wherever you wanted to go, no shopping malls nor movie theaters.  In fact, there was no radio, television, and only a few people had telephones to visit with their neighbors.  What could you do to liven up your days?

Men, at least Christian white men, had the option of joining over fifteen fraternal organizations, including the Masons, Odd Fellows, or Elks.  The Masons had four lodges in the city, all meeting at the Masonic Hall at 2nd and Hickory.  There were four lodges of the Independent Order of Odd Fellows (IOOF), one of them a German Lodge, and two lodges of Daughters of Rebecca.  The IOOF Hall, at 2nd and Jackson, hosted meetings for several of the fraternal groups.  However, the German Lodge met in its own Hall at 231 S. Front St.

There were other fraternal groups, called “secret societies,” with less familiar names, like The Ancient Order of Hibernians, Knights of Honor, or Knights of Pythias.  Membership in many of these groups provided some health insurance and burial benefits, and several still operate today as insurance providers. The Ancient Order of United Workmen (AOUW) was the first fraternal society to provide sickness, accident, death, and burial policies.  The AOUW also had a Hall, at 327 S. First St.

Some Mankato citizens were members of multiple organizations.  However, groups could be selective in their membership.  Members of The Ancient Order of Hibernians must be Catholic and of Irish descent.  The Order of Foresters was also a Catholic association.  Knights of the Maccabees only accepted men of good moral character, and they must also be healthy.  Anyone whose occupation was hazardous was excluded, as were those involved in the liquor trade.  The Modern Woodmen of America was quite open religiously but restricted its members to residents of the twelve healthiest states, which included Minnesota.  The Improved Order of Red Men, who was trying to begin a tribe in Mankato, focused on temperance, patriotism, and American History.  Some of these organizations had women’s auxiliaries or organizations formed by women.  The Royal Neighbors of America, for example, patterned itself after the men’s groups but insured only women.

These fraternal organizations were also social groups sponsoring dance parties, musical evenings, or perhaps a patriotic address.  A New Year’s Eve Ball was sponsored by the Knights of the Maccabees, at the AOUW Hall.  The Knights of Pythias sponsored a “select dancing party” on January 10 with an orchestra from Baraboo, Wisconsin.  Over 250 people attended.  The Royal Arcanum engaged the same orchestra for their dancing party later in the month.

You could also join a more literary-sounding group, like the Fortnightly Club which heard a paper on Spanish authors and a talk on Mysticism vs. Realism that first month of the new century.  There were events at the Opera House, the Thalia club if you were interested in drama, the Mozart Symphony Club if you were musical.  The Mankato Athletic Club had over 100 members.  The YMCA also provided athletic opportunities.  Or you could travel to Mapleton and Curl.

If you lived elsewhere in the county, many communities had chapters of the most popular lodges. Lake Crystal publicized a Self-Culture Club, and Mapleton held a series of lectures with stereopticon views.  There were also Creamery Associations, Grange meetings, and the G.A.R. (Grand Army of the Republic) with posts in many smaller villages.  To be a member one needed to have been a part of the Union forces in the Civil War.  The Women’s Relief Corp was the auxiliary group for women who were loyal to the north during the war.

Of course, all communities had churches.  Eleven Christian denominations were represented in Mankato alone.  There were Sunday and weekday services, groups for men, women, and young people.  The Women’s Christian Temperance Union (WCTU) was active in several communities.

The citizens of Blue Earth County seemed very active and involved in their communities, and a cold or snowy month did not discourage gatherings, either formal or informal.