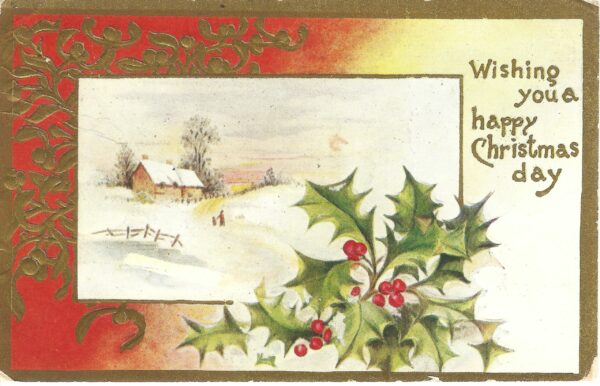 Wondering what to buy your loved ones this Christmas?  Why not look back at Christmas advertising from the past. How about a cracker jar or a gold fountain pen.  Those are gifts advertised in The Free Press in 1900.  A Victorla or a Hoover was suggested gifts in the 1920s.

Studying the newspaper for Christmas gifts in 1860 would have given you no ideas.  But you would learn you could purchase Bragg’s Arctic Liniment [sic] or Wright’s India Vegetable Pills for your mid-winter aches and pains.

By the 1880s, ads for Christmas gifts were evident.  The item of the year appeared to be sewing machines, only $19.00 at Sandborn & Walz’s on South Front.  George E. Brett had silk fabric and lace, “new goods bought especially for the Holiday Trade.”  For the man in the family, there were gold-headed canes at Taylor’s on South Front.

Christmas ads began to appear before Thanksgiving in 1920, and stores were open evenings as Christmas approached.  Stan A. Smith offered watches, manicure sets, or cigarette cases.  J.C. Penney had felt slippers for children.  Albert H. Silber suggested that handkerchiefs made ideal gifts.  Even the Free Press had gotten into the gift-selling business, offering desk calendars and inkstands.  It was apparent that electricity was more common in the area, with the number of ads for vacuum cleaners, toasters, lamps, and curling irons.

The importance of electricity was still obvious in 1940 when a joint ad with NSP, Mahowald’s, and Landkammer’s announced, “Let’s make it an electrical Christmas.”  Radios, electric heating pads, corn poppers, and waffle irons were added to the other small electrical items.  Miller Motors was also selling electrical appliances, as well as bicycles, skates, and electric trains.  Brett’s offered some smaller items, a negligee ensemble perhaps, or a pipe rack and ashtray, ties from 49 cents, and socks of all sizes from 19 to 50 cents.

Electric appliances were still the gift of 1960; electric frying pans, electric razors, a slide projector to go with your new camera, or a transistor radio.  But televisions, even in color, were the biggest draw.

What may surprise the modern-day consumer when looking through the Christmas ads is the scarcity of suggestions for children.  Sandborn and Walz’s had toys from 2 cents to 5 dollars in 1880, including “dolls of all shades and sizes.”  In 1900 The Fair, on South Front advertised itself as Santa Claus’ Headquarters with their first year of selling toys.  Fred. Eichorens’ on North Front had imported toys.  Thos. Dooley & Co. on South Front also claimed that “Santa Claus has established his headquarters for Candies, Taffies, Nuts, Fruits,” but no mention of toys.  They did have a special stock of cigars, pipes, and tobacco for the holidays.

By 1920 Bretts’ displayed dolls in their window, for $1.75 to $7.50.  One could also purchase a hat for a doll at 10 cents.  Salet’s, at Main and Front Streets, had become Santa’s Headquarters, advertising Santa’s arrival on December 9 on the 10:35 train.  Children were encouraged to meet him at the station and then visit their Toyland.  The Fair Store advertised toys one might expect for children; tinker toys, erector sets, toy dishes, or alphabet blocks.

Salet’s seemed to remain Santa’s Toyland into the ’40s, although Brett’s had “toys for every age,” 10 cents and up.  There were toy kitchens, doll trunks, nurses’ kits for girls, and tool chests, tractors, and doctor’s kits for boys.  Toys were advertised specifically for their intended audience, except for the item of the season for every boy and girl, a cowboy suit, running from $1.00 to $1.98.

Many items advertised in past years would not appear on this year’s Christmas list.  Is anyone asking for silk stocking, or a smoking jacket (between $3.50 and $5.00 at The Hub in 1900), or a vest-pocket Kodak for $9.49 in 1920?  Who needs candles for their tree?  We do not have to wait for apples, coming in heated fruit cars from the Yakima Valley in Washington State, as in the 1920s.  However, the market for jewelry, ties, Christmas Candy, sleds and skates, and even socks never lessens.