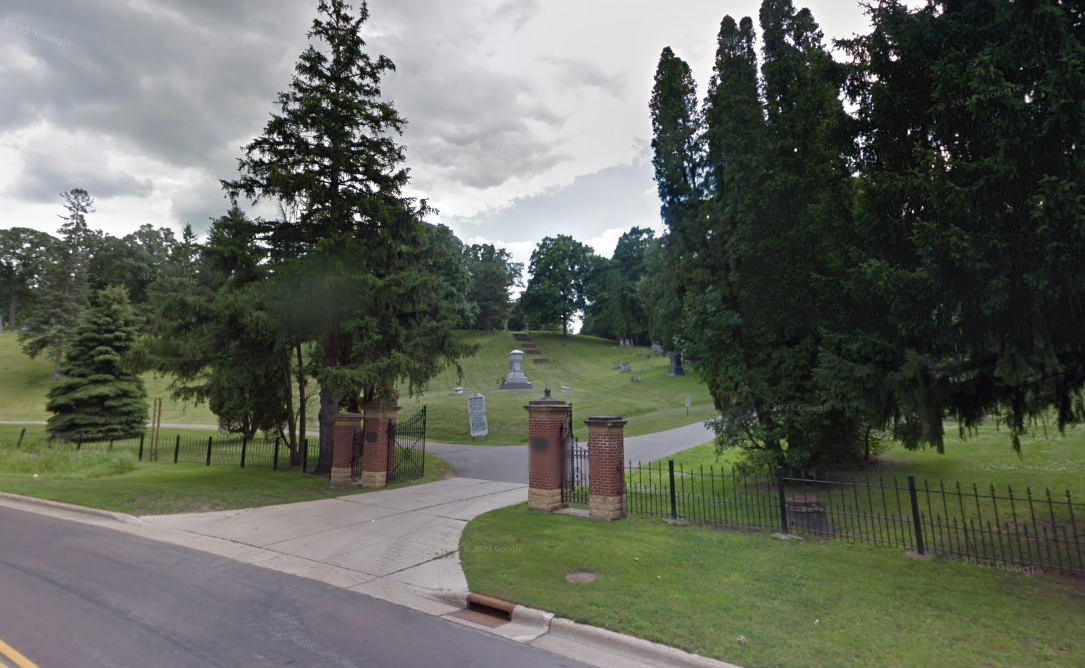 When a new community forms, as the city of Mankato did in the 1850s, it will soon need a place to bury its dead.  In 1857 the Masonic Lodge purchased about 16 acres of land along Thompson’s Ravine and began the Rural Grove Cemetery.  However, the venture proved unprofitable.  In 1861 the land was sold to John Shaubut, becoming a private burial ground, and later abandoned.  Many of the bodies were reburied in other cemeteries. A small Catholic cemetery was started about the same time and near the same location, later moving to Calvary Cemetery.  Rural Grove and the Old Catholic Cemetery are both remembered in Pioneer Memorial Park, along North 6th Street and Thompson Ravine Road.

It is told that a group of men met under an oak tree along present-day Glenwood Avenue in 1863 to select a new cemetery site.  However, the cemetery was not incorporated as the Mankato Cemetery Association until July 1869, 150 years ago.  Twenty Five acres were purchased from John Brules, at the cost of $55 per acre.  The funds were raised through subscriptions, which could be partly redeemed with lots.   Fifteen-foot square lots were laid out, costing between $11.00 to $15.00 per lot, depending on location.  The first burial was in March of the following year.  Soon after, the name Glenwood was given to the cemetery. The cemetery was enlarged in 1938, with the purchase of 15.85 acres.

A perpetual care system was adopted in 1885, at the cost of $100 per lot.  Intending to use interest for general maintenance and the purchase of flowers, funds did not cover expectations. Glenwood Ave was hard surface in 1895.  An article in the Free Press that year called it “one of the handsomest cemeteries in the state.”   A well, with piping to all parts of the cemetery, was dug in 1896.

Improvements at the beginning of the new century included an iron fence along the front, replacing a wooden fence, new cement walks, and the erection of a sarcophagus monument, donated by R.D. Hubbard.  Built in the Romanesque style, it had eight columns, 800 cubic feet of granite masonry, and weighed 100,000 pounds.  Permits were issued for cars to enter the cemetery in 1916, and roads were widened in 1927.

The Iowa Mausoleum Corporations erected a mausoleum in 1912, called the Mansion House of the Dead.  It was the first community mausoleum build in Minnesota.  Built of concrete and steel, in a Grecian style, it contained 246 crypts, plus two receiving vaults to be used by the cemetery association.  There were stained glass in the windows, mosaic tile along the corridor, rugs in the restrooms, and entrance doors that weighed around 700 pounds.  It was operated separately from the cemetery until the company went bankrupt in the 1920s.

Managers of cemeteries encounter many problems, including destruction of monuments.    $25,000 worth of damage was done in one night in November 1967 when nineteen monuments, eight urns, and nine markers were tipped over.  Many were older marble pillars, which were easier to tip, and then broke in the fall.  March 1978 had damage either by vandals or the tree trimmers who were removing dead and dying elm trees.  February 1976 the caretakers had problems with snowmobilers in the cemetery, and beer drinking parties in warm weather.  Spring, 2015, saw a mudslide on the north hillside.  Such incidents were not just a modern-day problem.  In 1911 a part of the fence was stolen.  There were problems with automobiles frightening horses, and leaving grease spots on the road, in 1914, and in September 1893, fifteen monuments and slabs were pulled up.

Maintenance of Glenwood Cemetery continues today, overseen by the Cemetery Association Board of Directors, made up of eight to ten members.

Learn more about Cemeteries in general with this video on demand.