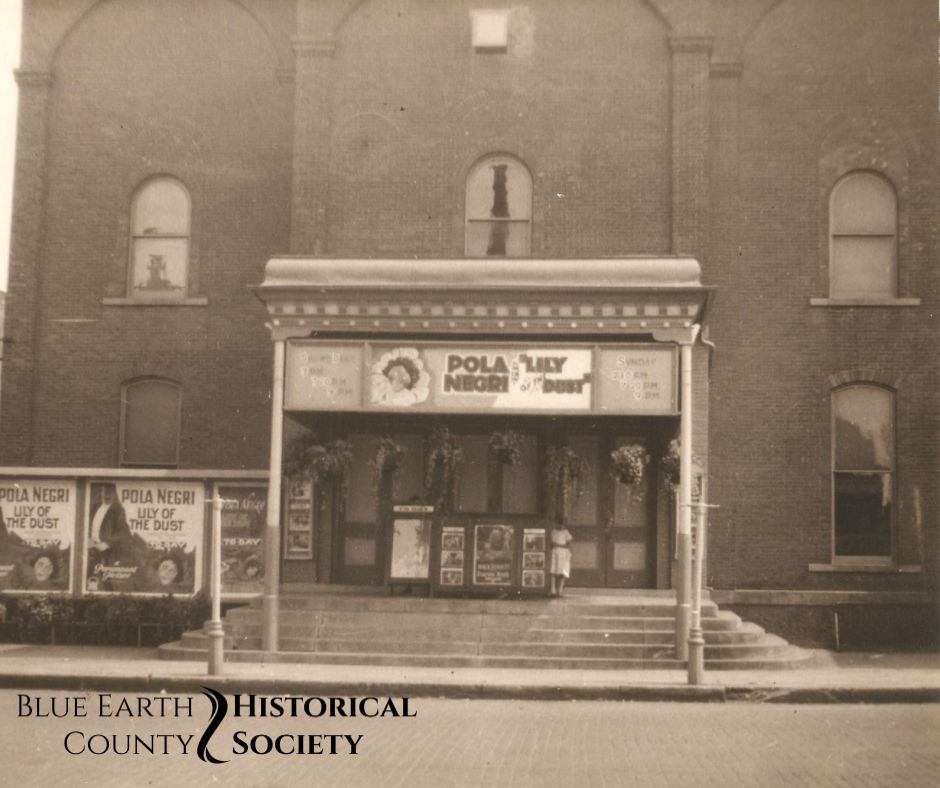 The Mankato Harmonia Association was formed in the 1870s as a German singing society.  Its membership included many of the most important businessmen of the community.  Desiring a large and well-ventilated hall for performances, the group undertook the building of Harmonia Hall, located on Second Street, between Hickory and Walnut.

William and Jacob Bierbauer, local brewers, purchased the land in 1870, transferring the property to the Association.  Built in 1872, the main hall measured 62 by 70 feet, with a balcony, and a 30-foot ceiling adorned with a dome.  The stage was one of the largest in the state.  A dining room, the same size as the main hall, was located in the basement and would seat from five to six hundred people.  At the time of its inauguration, the building cost $11,000 covered by loans and donations.  The drop curtain alone cost $400, and the lighting an additional $200.

The building was inaugurated on December 25, 1872, with speeches, music, and tableaux.  The evening began with the Harmonia Silver Concert Band, under the direction of Professor Elijah Howe.  Opening remarks were given in German and English by J.W. Hoerr, president of the society.  The evening continued with piano duets, the Harmonia Choir, and the Mankato Musical Association.  An inaugural address by Professor A. Neumayer, the director of the Harmonia Choir was given in German, followed by a brief address in English.  The reporter for the Mankato Weekly Record complimented Prof. Neumayer that his speech was “very finely delivered,” although he could understand none of it.  The evening concluded with National tableaux entitled “Columbia Wedded to Art.”  Again the reporter was very complimentary concerning the events of the evening, and the number of people who attended the event.  However, he wished that the musical presentations had included women, “as their presence leads grace and beauty to all pleasant assemblages, so their sweeter voices mingled with the heavier voices of gentlemen adds melody to music.”

The inaugural activities continued the following evening with a Ball and supper.  175 couples attended.  The reporter noted that Mankato had shown their support for the work of the Harmonia Society, supporting them by $1,000.00 for the two events.

Harmonia Hall hosted many events that winter. A Ball on New Year’s Eve would also include a supper, costing $1.50 per couple.  The program for January 18, 1873, included the Harmonia Silver Band, with seventeen silver band instruments, and Howe’s Harmonia Orchestra of eight pieces, both under the direction of Prof. Howe and the Harmonia Singing Society under the direction of Prof. Neumayer.  Prof. Howe was credited with being one of the best cornet players in Minnesota.  Wednesday evening, January 23, there was to be a grand ball after the concert.  Tickets were $1.50 for a couple, $1.00 for a “gentleman alone.”  There was no mention of single women.

Friday, April 4 was the last ball of the season, called a Grand Gift Ball.  Drawings would be made for prizes, including such items as a silver-plated butter knife worth $2.00, a solid silver thimble at $.65, a gold-plated toothpick valued at $1.00, or a box of seven Eagle lead pencils worth $1.00.  One-fourth of ticket holders would win a prize.  If the prizes weren’t enough incentive, the hall was to be lighted better than ever before.

Support for the events at the hall did not continue to be as strong in the following years.  Prof. Neumayer tried to create an Academy of Music, using the hall, but it had failed by 1876.  A new group of six investors, including the Bierbauer’s, took on the outstanding debts.  A remodeled hall was opened in 1878, named the Mankato Opera Company.

Monday evening, January 23, 1882, it was -6 degrees, with wind and blowing snow.  At 12:20 a.m. a policeman, taking a drunk to jail, discovered the building on fire.  Although a group had been practicing in the theater earlier in the evening for a local talent show, the fire was in a different part of the building.  Reports of the fire allude to possible arson, as two fire hoses were cut while being used to control the blaze.  When kerosene barrels in the ticket office caught fire, all the firemen could do was save the adjacent buildings.  The interior was completely destroyed.  Only the brick walls were left standing.  Insurance set the loss on the building at $12,602, $602 above the coverage.  The interior was insured for $12,000, but the loss was much larger.

In spite of the losses, the structure was rebuilt as a theater, opening in December 1883, and remodeled again in 1893 to seat 1000 people, renamed Mankato Theatre.  Managers over the years included A.G. Bierbauer, of the Bierbauer family, Charles Saulpaugh, son of the hotel owner, and Charles Greible, son of another original investor.  Besides the musical presentations, the hall was also used for political speeches, and John L. Sullivan boxed there in the late 1800s.  The early 1900s were considered a golden age of American theater, and Mankato was on the tour circuit.  However, it was not easy to obtain good professional productions and the hall’s continued existence depended on local musical and theatrical presentations.

Renamed the Orpheum in 1921, the building survived as a second-rate movie house.  It was closed in 1928.