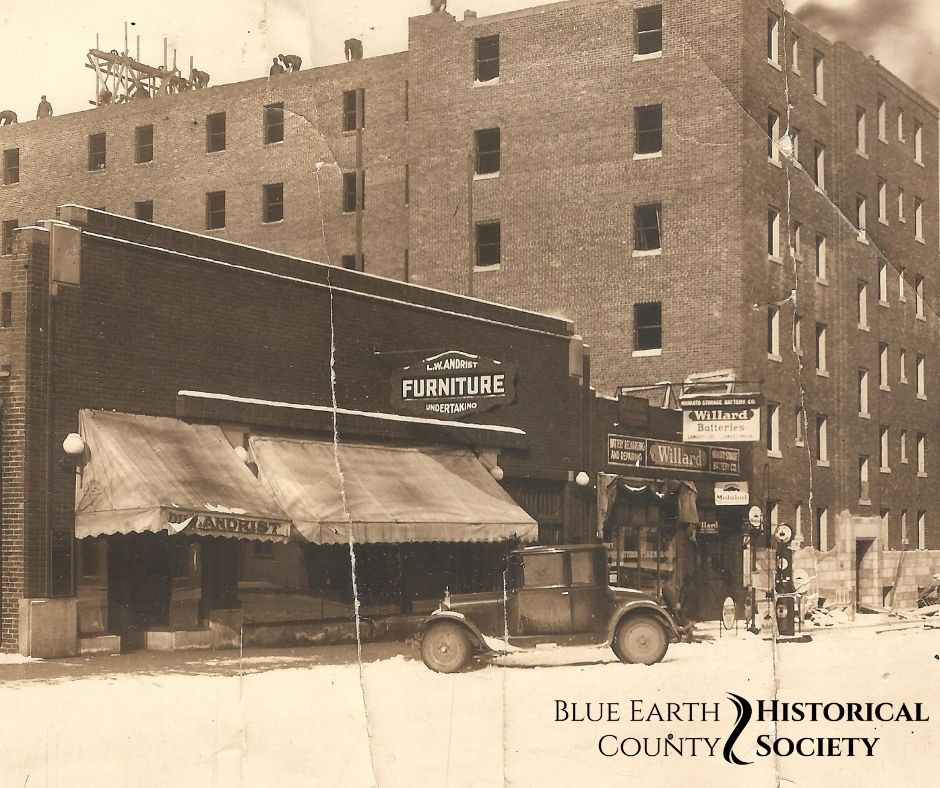 Funeral practices in Mankato have changed quite a bit over time. When Mankato was a young community, most people’s lives ended at home, and people would actually take turns being with the corpse night and day until the funeral.  Embalming the corpse began around the time of the Civil War, but it was by no means common practice.  There was a great concern in those days of people being buried while they were still alive.  That’s how the term “wake” came into being – people sat with the body to make sure the person didn’t wake up undetected.  A velvet-covered kneeler, vigil lights and folding chairs to accommodate mourners were among the mortician’s portable visitation accouterments.  At-home visitations were commonplace in rural America until about 1850 when they began making the transition to funeral homes.

Perhaps it is not surprising that furniture stores took over the responsibility of undertaking by mid-century (1850).  John Klein and Company, a large furniture firm, provided the first funeral home in Mankato. By 1910, Frank J. Busch and A.O. Scott took over the undertaking branch of Klein’s business on South Second Street.  The furniture company of Lamm, Landkamer, and Hohmann on South Front Street and Walnut dissolved in 1906, with Joseph Landkamer taking ownership and operation of the undertaking establishment.  Frank and Leo Landkamer, brothers, acquired the first auto hearse seen in this area in 1915.  Landkamer Brothers erected a new funeral home at 116 South Second Street by 1925.  Later, Landkamer merged with Johnson-Boman Company and built a funeral home at 826 South Front.

Meanwhile, the care for funeral arrangements continued to expand.  S.M. Morris, one of the South Front Street furniture merchants, decided to engage in undertaking and he opened an establishment in 1910 at 117 Cherry Street.  When Frank J. Busch built a new store at 117 East Jackson in 1915, the Johnson-Boman Company acquired Busch’s previous stock.  Morris and Kelly entered the business, occupying the Presley Building on South Front in 1914.  Gosewisch Brothers Furniture Company at 527 South Front opened a new funeral home at 115 South Broad Street in 1929.  Today the undertaking business has been consolidated considerably, with some four businesses in Mankato and North Mankato.