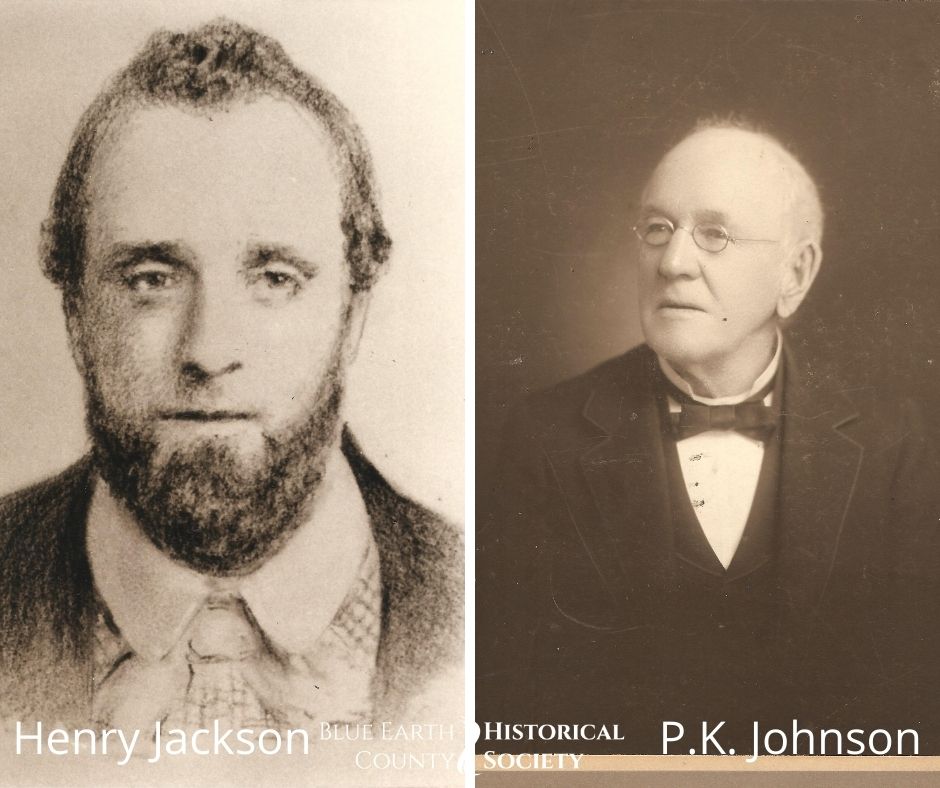 Among the founding fathers of Mankato, Minnesota, two names stand out in prominence: Parson King Johnson (called “P.K.” by all his associates) and Henry Jackson. P.K. Johnson was the first actual settler, but Jackson soon followed. Johnson and Jackson, along with other members of the founding company, arrived at the Bend of the Minnesota River in February 1852.

Henry Jackson married Angelina Bivins in 1838 at Buffalo, New York, and the next year the couple came to Green Bay, Wisconsin. By 1843 they were living in St. Paul. Henry became postmaster in St. Paul while Angelina became known as “the pioneer American lady of St. Paul.” Possibly this sobriquet derived from the generous hospitality proverbial to this lady. A year after Henry came to Mankato in 1852, Angelina joined him. Henry died in Mankato in 1857, and in 1864 Angelina married John S. Hinckley. She met with all the rugged experiences that belonged to the wives of the pioneers. Henry seems to have been the proprietor of a general store in Mankato. Some of the items Henry was known to stock in his store are interesting: barrels of varieties of whiskey, sardines, oysters, and tobacco. Apparently, he had an epicurean taste for the pioneer community.

P.K. Johnson haled from Brandon, Vermont, born in 1816. His mother was a descendant of Jonathan Carver, an English traveler, who claimed to have purchased from the Dakota Indians in 1767 a tract of land from the Falls of St. Anthony to Lake Pepin. In spring 1837, P.K. emigrated to the new Wisconsin Territory. He was appointed Deputy Sheriff and Notary Public in 1841, then in 1846/1847, he set up in business in St. Paul. P.K. took an active part in the organization of Minnesota Territory and was a member of the first legislature. He married Laura Bivens in St. Paul in 1850. From 1853 to 1856, P.K. served as the first Register of Deeds and first Postmaster in Blue Earth County. In 1856 and 1857 he represented this County in the State Legislature. For over 14 years he was village and city Justice of Mankato. In spring 1865 P.K. moved to Kasota in an unsuccessful attempt to engage in business with a Mr. Babcock. Finally, in 1894 he moved to Brainerd.