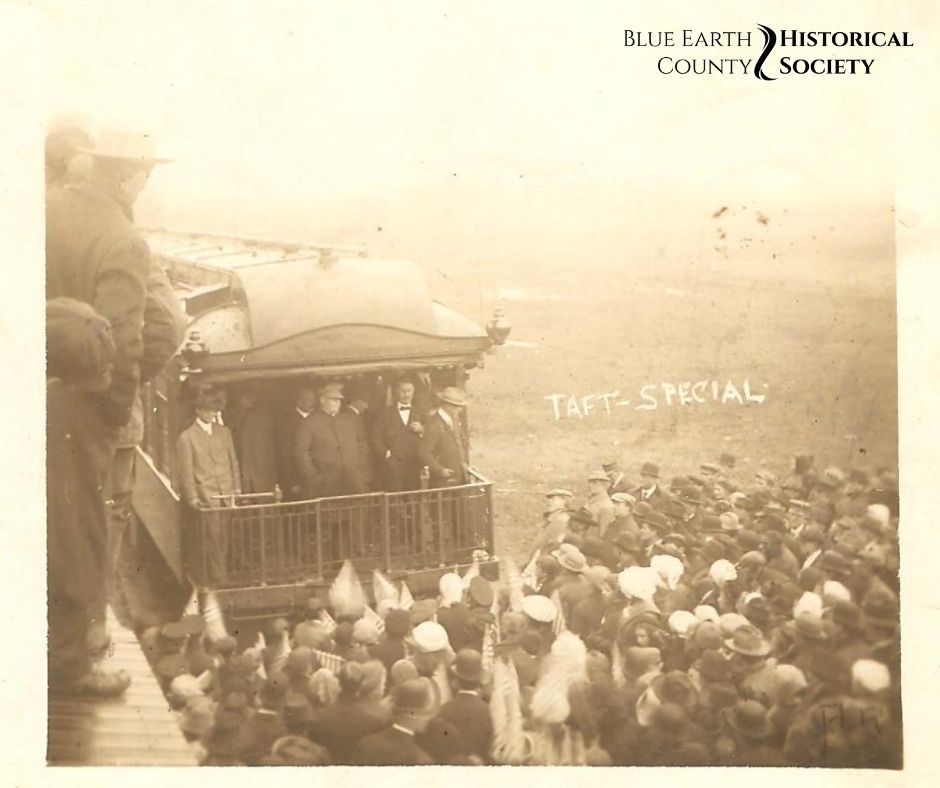 In what was a western circuit of President William Howard Taft’s campaign for re-election, the GOP incumbent stopped for part of a day on October 24, 1911, in Mankato.  His special train arrived at 11:28 a.m. from Omaha at the Milwaukee depot.  Besides the president, there were United States senators and congressmen, judges of federal and state courts, military men, and those prominent in private life.

Thousands greeted the president, despite the uncooperative weather –it was a heavy downpour.  Hundreds of school children yelled their welcome while they waved their flags.  Women and young girls added to the acclaim.  People arrived in every kind of vehicle from one-horse chaises to automobiles and all trains were crowded by sightseers.  Streets were decorated, especially at the little depot on Pike Street.  D.W. Radical, in charge of street paving, actually finished his work in time for the great event.

A parade around the city in the rain by 18 automobiles was staged to show the chief executive of our community.  The first three vehicles, including the president’s, had their tops down.  Taft defied pneumonia for a time, keeping his silk hat in his hand to wave to the crowd.  The parade was shortened on Taft’s doctor’s orders for fear of the president’s health.

At the opera house on Second Street, Taft delivered an hour-long address, chiefly dealing with his two main themes: world peace and anti-trust action.  At 12:30 the president was driven to the Elks Club where he was the guest of the Mankato Commercial club at luncheon.  Taft departed for St. Peter and Shakopee at 2:30 p.m. to continue his whirlwind tour.

Written by A BECHS Volunteer