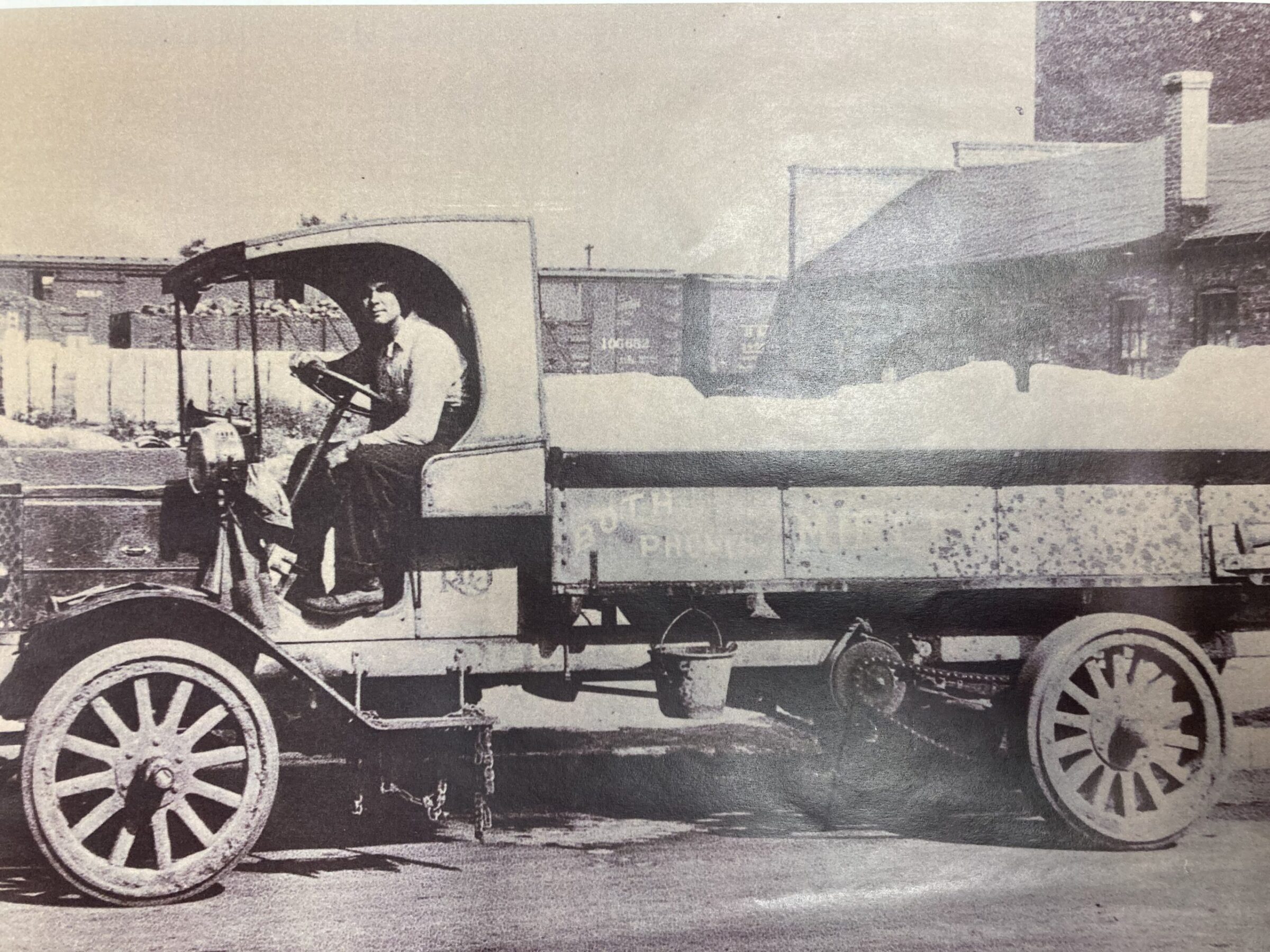 The ice house is one of those things which have become thoroughly obsolete; it is likely that the average person of today has no idea of what it looked like or what its role was.  Since the middle of the last century, the gas- or electric-refrigerators have completely taken over the task of food preservation by cooling.

But some residents of Mankato will recall the familiar spring and summer sight of the ice truck, one of nine, on Mankato streets stopping at residences.  The housewife put a sign in the front window showing either a “25” or a “50”.  This told the ice man she wanted a 25-lb block of ice or a 50-lb.  Before ice trucks, eight old ice wagons were pulled by teams of horses.  The streets, unpaved, were often so muddy that the ice man had to wear rubber boots to make deliveries.  This tracking of mud onto her floor must have added to the woes of the housewife.

Mankato Ice Company could trace its beginnings to 1897, but it didn’t really get going in earnest until 1900.  C.W. Miller built the original ice house at the corner of Owatonna and West Fourth Streets in West Mankato, a block north of Roosevelt School.  His son, Harry, took over in 1930 and ran it until 1937 when C.C. Miller became the owner.  In 1931, Mankato Ice Company, sometimes known as Miller Ice Company, consisted of six sturdy structures, each with a peaked roof, side-by-side.  The walls were rough sawn timber, unpainted, boards held in place by vertical 10-inch diameter poles.  Nothing beautiful about it, but very functional.

There was more than one ice house in the Mankato area over this period.  In the region now occupied by Land of Memories Park, Rastus Watters, one time Mayor of Mankato, maintained an ice house on the banks of the Minnesota River.

To fill this vast storehouse, there was an annual ice harvest, lasting about six weeks, conducted by the various ice companies at the junction of Blue Earth and Minnesota Rivers at Sibley Park and at Spring Lake in North Mankato.  Fifteen hands were employed to harvest 20,000 ice cakes –2000 tons—from the lake.  180,000 cakes came from the Blue Earth River.  In the 1945 era, the ice was cut by gas-powered circular saws.  In the earlier era, horse-drawn ice plows did this operation.