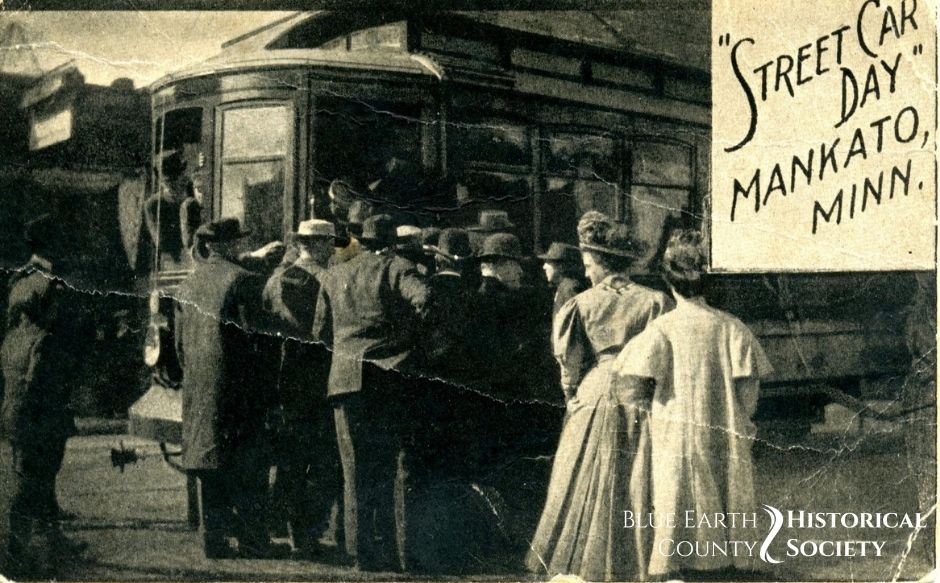 Streetcars operated in Mankato during two different eras for a total of 32 years. The Street Railway Company ran from 1886 until 1895. A 13-year stretch then occurred with no streetcar line. In 1908 the Mankato Electric Traction Company began and was in business until 1930. The companies were two very different entities and will be given essentially separate stories here. The only similarity is they ran on some of the same streets.

Horse-drawn streetcars had been operating in hundreds of cities before Mankato finally got around to putting one in. The Mankato Street Railway was organized in 1886 with $50,000 of capital stock by W.M. Farr (President), J.C. Noe (Secretary and Treasurer), J.A. Willard, and several others. Construction of the horsecar line was completed in July 1886. It ran for 20 blocks along Front Street from Vine Street south to Willard Street where the streetcar barn was located on the north side of the street.

The streets of Mankato in those days were rutted and muddy especially after rainy days and during the spring snow melt. To ride on a streetcar running on smooth rails, traveling from one end of town to the other would have been a dream. According to historian Thomas Hughes, the number of fares for the first three days of operation were 966, 1033, and 1455 respectively. It turned out that except for circus days and other citywide events these were the biggest usage days ever. Low usage plagued the endeavor for its entire existence.

In the meantime, on the national scene, electric streetcars were beginning to replace the horsecars. For example, around 1890 all the smaller gauge track in Minneapolis was replaced by the wider 4’8.5” track and electric overhead wires were put into place. Talk of renovating the Mankato system was discussed from both a financial aspect and a regulatory one, but no changes were made. The horsecar system continued to limp, along with losing money every year until operations ceased in 1895. At that point, the tracks were taken out and creditors were satisfied. The company lost about $75,000 or $12,000 per member.

Thirteen years went by with the Mankato community trying to start a streetcar business, but always coming up short with either capital or willpower. With cities like Winona, St. Cloud, Duluth, Minneapolis, and Stillwater having successful electric streetcar systems, Mankato was overdue for business. Finally in 1907 things came together.

One track line on North Broad Street ran south from Mabel Street and on to Front Street by way of Vine Street and then to Sibley Park. On Front Street between Main and Cherry Streets, double tracks allowed for cars going in opposite directions to pass. A second line ran from Front Street up Main Street Hill to 5th Street where it passed in front of the teacher’s college and continued to Warren, 4th, Pleasant, and Willard Streets.

May 1, 1908, was declared “Streetcar Day” in Mankato as the lines opened for business. It would go down in history as “the greatest that ever was” according to the Mankato Free Press. A 28-piece band played in the street, a horse-racing program was held at Sibley Park and the fairgrounds played host to a baseball game between Mankato and Madison Lake. There was an evening banquet at the Saulpaugh Hotel, a masque carnival on Front Street and all downtown merchants left their showroom lights on all evening.

At a cost of 5 cents a ride, it was affordable for most everyone. For the first two years of operation, the company reported they had collected 1,545,708 fares and $11,800 dollars of profit after expenses, interest payments, and taxes.

The Mankato Electric Traction Company was constantly searching for ways to increase ridership. In 1913, tracks were added to Pleasant and Willard Streets. In 1919 Pleasant Street was extended to Baker, up Baker to Moreland and down Moreland to the railroad tracks. At this point, the Willard Street connection was taken up. Just over five miles of track was used for the streetcar line.

Hoping to attract more fares out to Sibley Park on the west end of the line, the company bought three monkeys for the zoo and paid the electric bill for new lights at the park. They also offered free movies at the park until the movie theaters in town cried foul because of unfair competition.

Each car was operated by a conductor and a motorman, but around 1915, the company started employing only motormen, a sign of possible financial troubles for the streetcars. Beginning in 1922 the company steadily operated at a loss. Also at this time and for the next eight years, there was tension between the company and the city. The city claimed the streetcar company was responsible for the upkeep of the pavement between the tracks, which they had no money to fix. And with the increase in the number of automobiles, the Front Street section became crowded.

In addition, the Mankato Electric Traction Company could not set its own rates but was at the mercy of the city council. The rate was five cents even back in the horse-drawn era. In 1925 the company requested an increase from a nickel to a dime. People were furious and said the company could make a profit at two rides for 15 cents. Obviously, a nickel meant a lot more then than now.

Finally, the city said enough and revoked the franchise. On March 1, 1930, the last streetcar stopped operating and thus the second street railway ceased to exist. The automobile proved to be its demise. While the citizens, in the end, were not sad to see it go, for a few years of glory the streetcars served an important and fascinating role in the towns’ history.

Learn more about Mankato’s Street Car lines with this Video-On-Demand.

Watch this history in a minute to get the fast facts.