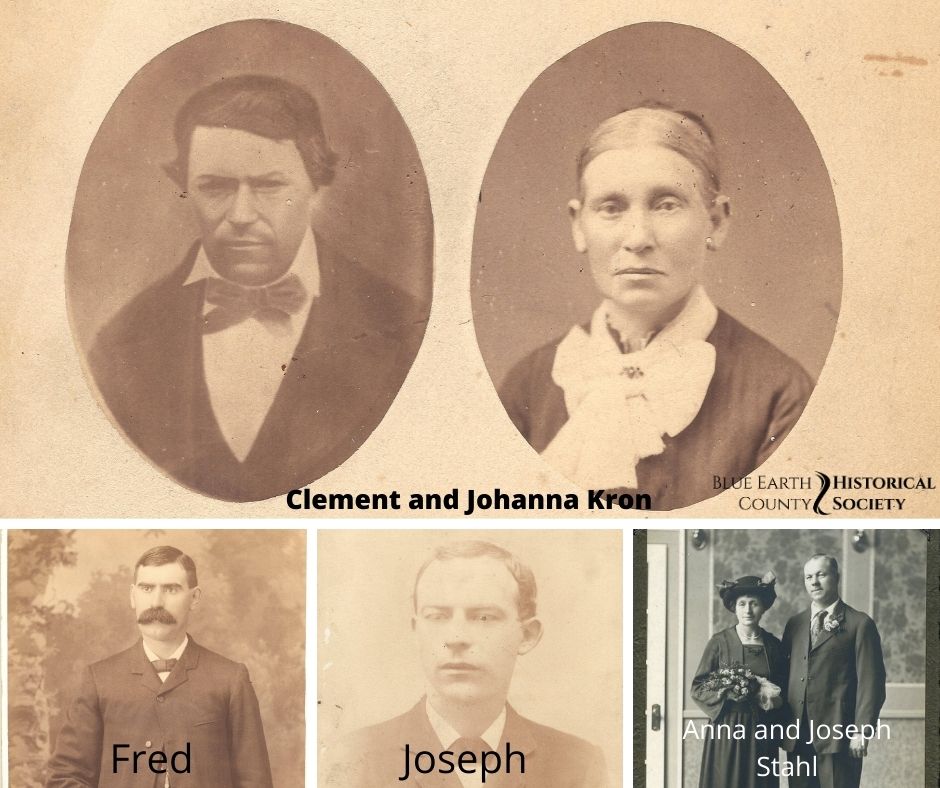 Clements and Johanna Kron, and young son Frederick, were one of the first families to settle in the little community of Mankato beginning to grow up along the Minnesota River.  Clements Kron arrived on the steamboat Clarion in June 1853.  His wife and young son came shortly thereafter.  Clements built a log cabin on North Front Street where he ran a tavern and also provided some minimal lodging, mainly for early German settlers like himself.  By 1858, a new log building became a legitimate hotel, called the Minnesota House.  $1.00 per day provided lodging and meals.  Enlarged in 1872, it stood thirty feet by sixty feet.  There was a dining room on the first floor.  The second floor had thirteen single and double rooms, and the attic was divided for additional quarters.   Kron also ran a livery stable at the site.

Upon Kron’s death, in 1873, his wife and sons managed the hotel for some years until his daughter and son-in-law, Anna and Joseph Stahl, took over the business.  In 1893 the frame building was moved to the back of the lot, and the present brick building was erected.  Three stories high, it held forty-two guest rooms, was heated by steam heat, lighted by gas and electricity, included bathrooms and toilet rooms, and provided hot and cold water.  The old building was used as a barn until 1923 when the hotel was enlarged.

That brick building, known as The Stahl House, still stands at Riverfront and Plum.  It ceased operating as a hotel in 1983.  The building was renovated into apartments, and also houses the Wine Café.

The oldest son of Clements and Johanna, Frederick Kron, was not yet a year old when he was brought to Mankato by his parents.  As an adult, he became a prosperous merchant in the growing city, opening a general merchandise store at 309 North Front Street in 1874, the site of his father’s original tavern.  In 1895 he built a larger department store at Front and Main, called “The Leader.  It had its own steam heat plant, electric lights, and elevators.  One could purchase crockery, glassware, and groceries in the basement.  The first floor was filled primarily with dress goods, notions, shoes, and men’s clothing.  Millinery goods and carpets were among the items on the second floor.  The Elks met on the third floor, with a lodge room, dancing hall, billiard and card room, and a kitchen.  The building was sold to Leon Salet in 1928 and stood until 1974 when urban renewal changed the face of Front Street.

Although his commercial life lasted 42 years and Fred Kron’s name often appeared in news of the day so that he seemed to have been involved in many of the pursuits of a growing community, his only public service was a three-year term as an Alderman.  Kron was active at St. Peter and Paul’s Catholic Church, and it was he who donated the statue of St. Joseph, brought from Paris, that stood atop St. Joseph’s hospital.   Dying in 1917 without a will, the family of his late wife, Clara Ulman, contested the estate in court.  In present dollars, that estate was worth over $2,500 000.  A large statue, known as Kron’s Angel, marks his grave at Calvary Cemetery in Mankato.

Joseph Kron, the second child of Clements and Johanna, is credited with being the first child born to settlers in Mankato, in 1855.  Joseph was known as a student and learned to read in three languages.  However, he had eye problems from a young age, possibly a crooked eye and cataracts.  He may have overused his left eye, his better eye, studying.  In 1890 he, and his mother, traveled to Stuttgart, Germany for eye treatment.  Again in 1903, he had surgery in Chicago.  Never marrying, he lived with his mother or with a sister.  He died in 1918, shortly after his mother’s death.

Anna Kron Stahl is remembered for her connection to the hotel.  She died in 1944, at 87 years of age, having lived her entire life on the same corner of Mankato.  In her later years, she shared some memories of early life in Mankato, including teepees across from her father’s inn, and her first pair of patent leather shoes, because wooden plank sidewalks had been laid and she could walk without getting into the mud.  She also remembered that her father paid $25.00 for a cat because he needed a mouser, and cats were scarce.  She said, “That cat could do just as he pleased.” The Kron’s had three other daughters: Amelia, who never married, Berdie (Fricke), and Leona (Seidle).