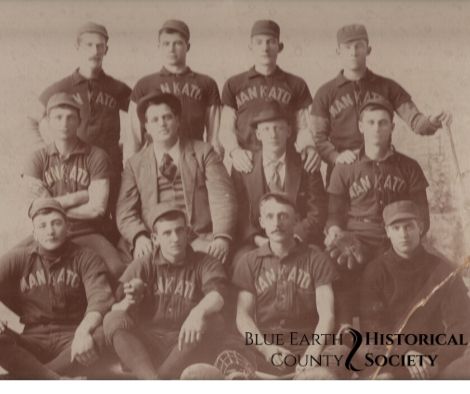 Baseball in the Mankato area has remained a popular sport since the late 19th century. Prior to the 1880s, baseball as we know it was quite a different sport. Back then, baseball was a much more brutal sport. Only the first baseman was permitted to wear a small glove over his palm. According to one newspaper at the time, catchers and outfielders were considered “sissies” if they so much as hinted that they wanted to wear a glove or a mask. It did not help that those players were using pretty much the exact same ball used in contemporary baseball.

Baseball evolved to its modern form in the 1880s. This was the period that the Mankato Baltics were founded. Facing such teams as the Oshawa Liberals, the Albert Lea Lemon Suckers, and the St. Peter Muffins, the Mankato Baltics played a wide variety of teams across southern and central Minnesota. Chief amongst the Baltics’ contributions to baseball was the introduction of the curveball by player Billy Mead in 1889. Indeed, Mead’s introduction of the curveball would lead the Baltics to 19 wins and only two losses that season. However, back then, there was the concept of professionalism in sports and the players’ only monetary reward for baseball was various prizes given to the victors in tournaments.

There were also various specialty leagues that co-existed with the Baltics. For example, one league called “heavy nine” was only for men over 200 pounds. One newspaper account showed that in one game, an overly portly player got so carried away at having reached first base that he jumped up and down on the base and broke his ankle. While the Baltics were not the only baseball team in Mankato, they were certainly one of the most popular and successful due to the introduction of the curveball.