History of Cab Companies in Mankato

History of Cab Companies in Mankato 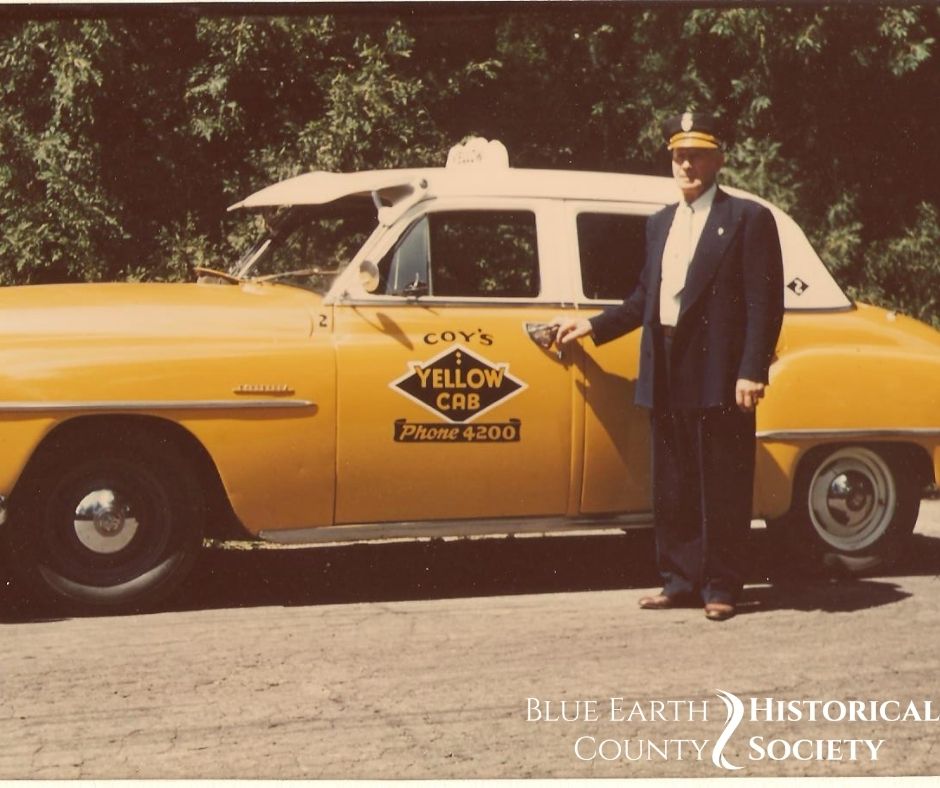 The story of cabs in Mankato is a long one spanning over one hundred years. The first automobile taxicab in Mankato was a 1912 Ford purchased by Gene Coy for the Coy Cab company, which started that same year.

“The taxi business has changed a lot since 1917,” Louis Kauffman said to Free Press reporter Wally Neal on the eve of his eighty-fourth birthday in 1950.  Like Gene Coy in 1912, his son, Arthur Kauffman, started Kauffman cab in 1917 with a Ford taxi- a model “T”. “We cut out the canvas side curtains and put in celluloid so that the passengers could see out. In the winter we put a jug of hot water or a lantern in the back seat to keep fares warm on long trips. They still got cold, though,” he reminisced. In 1950 Kauffman Cab had a fleet of seven-passenger Packards equipped with two-way radio and heater fans, no doubt more comfortable than the old model “T”s-even with the side curtains cut away.

In 1925 Yellow cabs started carrying passengers from Mankato to Minneapolis. Owned and operated by local drivers, the cabs picked up fares at the Saulpaugh Hotel starting at seven o’clock a.m. and continuing hourly until eight o’clock p.m. The charge for this two and a half hour trip? Two dollars and fifty cents.

Thirty-five years later, in December 1960, Joseph Wortel founded Kato Cab. Starting with just one cab he built the company up to about 20 cabs by the late 1960s. In 1973 Kato Cab expanded further, buying out their competitor, Bradford Cab. Bradford Cab had already bought out veteran cab company Kauffman Taxi. As Mankato grew away from its downtown, the company sought a change from the “downtown oriented” zone system of determining fares. In 1979 they raised their minimum fares from $1.25-1.50 in the city and .75 to $1.00 in rural areas.

The 1980s saw a decline in the number of people using cabs as families started buying second cars. In 1985, 2 years after her husband died, Dottie Wortel sold Kato Cab to Jeri Schmitt of St. Peter. Schmitt wasted no time making her mark on the business. She had all the cabs painted yellow and installed meters, doing away with the old zone system for determining fares. In 1987 the estimated cost of a cab ride to Minneapolis rose to about ninety-five dollars, a far cry from the $2.50 charged in 1925.

Red & White Taxi entered the scene in 1989 and briefly provided competition for Kato Cab. Kato Cab bought them out in 1992. There wasn’t enough business to support two cab companies. This fact, however, has not stopped other taxi services from trying to take their share of the money. The 21st century has seen an explosion of new cab companies that are focused not only on delivering people but providing other conveniences such as grocery delivery and prescription pickup. Yes, the taxi business has changed a lot since 1912.

The story of cabs in Mankato is a long one, and it’s far from over.