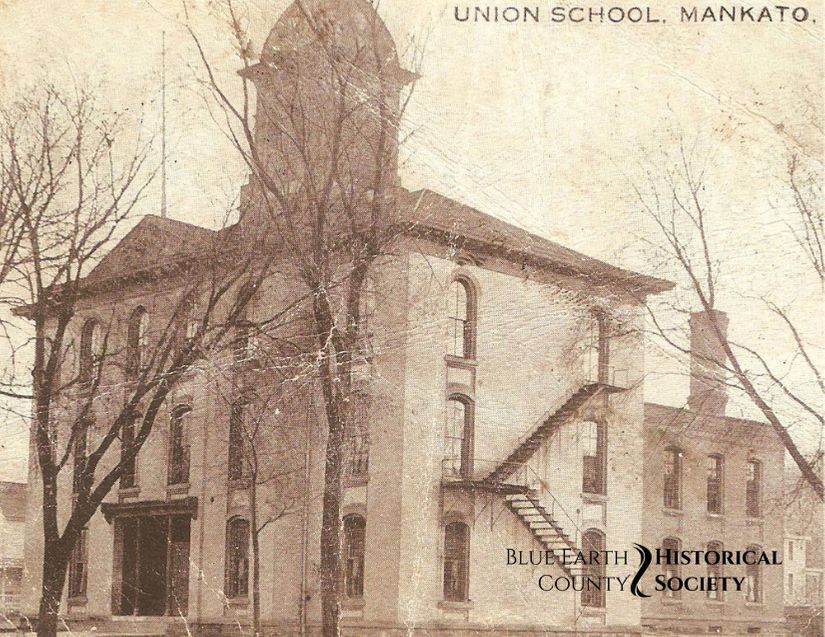 The lot located at the corner of Broad and Mulberry streets in Mankato has been called home by more than just the office buildings that occupy it today. In 1855, the very first Blue Earth County schoolhouse was erected. Built of logs, the simple, yet handsome building was used not only as a school but also as a church and an opera house. The same year the school was built, the first school district was organized by three elected trustees; James Thomson, Theron Parsons, and A.D. Seward. The district decided to name the school “Union.” The origin of this name has been questioned throughout the years. Although it has never officially been proven, some believe the school was named after the Army of the North, which had just been victorious over the Southern Forces in the Civil War.

Shortly after the birth of the district, the aforementioned trio of trustees met at Mr. Parsons’ home (which is now a log house located on the same block as Franklin school) to launch the interview process in hopes of finding a suitable teacher. It didn’t take very long for the men to choose the most capable prospect, L.G.M. Fletcher. Fletcher agreed to teach the school for $35/month, knowing the school’s treasury only held a total of $70. After the money ran out, he became increasingly more interested in the school and decided to teach a third month free of charge. At this time, the enrollment had reached 37. It was said that Fletcher believed the pupils he taught “averaged more than ordinarily bright”. In 1859, an assistant volunteered and was eventually hired, to handle the school’s finances and growing enrollment. The school continued to grow and eventually overflowed into rented rooms in the community.

Learn more about another school in Mankato, Franklin Elementary!