Steamboat on the Minnesota

Steamboat on the Minnesota 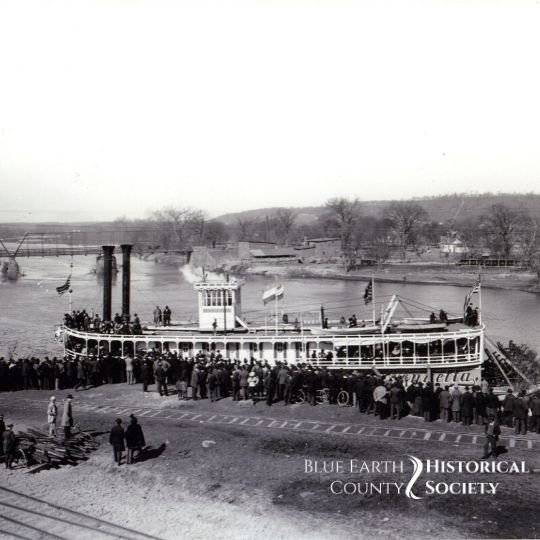 Steamboats once plied the Minnesota River, as far as the Upper Sioux Agency below Granite Falls, carrying passengers and freight to the communities forming along the river.  Names like the Jeannette Roberts, Franklin Steele or Julia, which hit a snag just north of Mankato and sank on May 10, 1867, are remembered in historical accounts.  For a decade steamboats were the major means of transportation between Mankato and St. Paul.  As boats could only run during the early summer before the river became too low, and as rail service took over the transportation of people and produce, steamboats disappeared from the river.

However, not all boats were carrying freight.  The first boat to come upriver as far as the future site of the city, in July 1850, was the Anthony Wayne, an excursion boat.  Traveling up the Mississippi from St. Louis, with passengers wanting to see this new country, the excursion even brought along a band.  In St. Paul it was suggested boats might continue on up the Minnesota, and a purse was raised for who could go the furthest.  The Anthony Wayne passed the Nominee and traveled several miles beyond the city site, but the Yankee surpassed them both, traveling as far as the future site of Judson.  However, it was turned back by the heat and the mosquitoes.

Years after the steamboat era ended, the Henrietta docked in Mankato on April 27, 1897.  It was an excursion boat, previously sailing out of Stillwater.  The sternwheeler, three decks high, was probably the largest steamboat ever to navigate the river from St. Paul.  Its first trip of 36 miles from St. Peter to Mankato took three hours, moving at twelve miles per hour.  It carried 175 people, including the St. Peter Band.  During its two hour stop in Mankato people were allowed to tour the boat.  As there had not been a steamboat docked in Mankato for twelve years, it was a source of great curiosity.

Captain Ed Durant, of Stillwater, planned to continue daily trips between Mankato and St. Peter, returning the same day, as long as he was able.  The round trip cost $.75 and the boat could carry 250 passengers.  A planned trip to New Ulm could not happen as a bridge had been built at Cambria a year earlier.  Trips were dependent on weather, as the railroad drawbridge at St. Peter could not be opened when too windy.  By early May the water was too low two miles north of Mankato, and Durant returned to Stillwater with his boat.

De Mers still saw potential for the river, quoted in the Free Press (May 11, 1901): “The old Minnesota is a nice body of water and should be taken care of….The farmers of the valley should get together and they would have no trouble in securing big improvements to the river which would return great benefits to them.”

Shakopee attorney J. J. Moriarity petitioned the legislature in 1927 to have the Minnesota River again made navigable to Mankato.  He suggested small locks be constructed between Carver and Mankato.  W.H. Pay, remembering the era of the steamboats, said he didn’t believe boats could compete with trucks and trains.