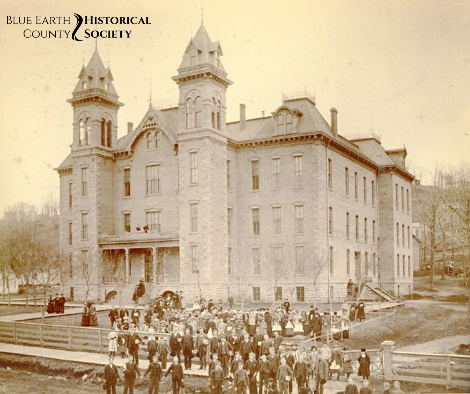 The Mankato Normal School started in the basement of the Methodist church in the fall of 1868.  The first student body had 27 students and they were taught by four instructors.  Compared to today’s colleges there are at least 27 students in one class.  The first graduating class from the school had 10 members.  Over time the school was able to move into a building that it could call home.

The new building was more suitable than the church basement and enrollment grew steadily over the years.  The need to enlarge the school came in 1893 when the renovation was done by architects Gerlach Thayer and Pass.  One of the major technologies of the building was the one telephone located in the president’s office.  And during the cold of Minnesota’s winter the school was heated by 32 furnaces and during the winter months, the south campus yard was filled with cordwood to feed the fires.

During its time the Mankato Normal School experienced a couple of fires.  The first of these fires occurred in January 1892.  The fire broke out on the ground level of the building in the afternoon.  There were students in the upper rooms but they all exited the building safely.  There was another fire in February 1922.  This fire destroyed the old building, but the buildings were replaced and the learning continued.

Learning wasn’t the only thing happening at the Mankato Normal School.  In 1898 the schools’ football team went undefeated.  At that time football was seen as a game for ruffians and the game was played very differently than the games we see today.   There was no passing and the ball carrier decided when the play was over.  The football season was 6 games in those years.  The football team only allowed one touchdown during their amazing season.  The team played mostly high school teams because of the way the schools’ curriculum was set up but they also played some college teams.

And so started the beginning of what came to Minnesota State University.  From starting classes in the basement of a church to the campus we have today.  Over time the small school would grow.  Changing names and buildings but still providing quality education.

Learn more about the buildings associated with the Normal School through the Fifth Street Walking Tour.

Watch this History In a Minute to learn more about the School’s history.