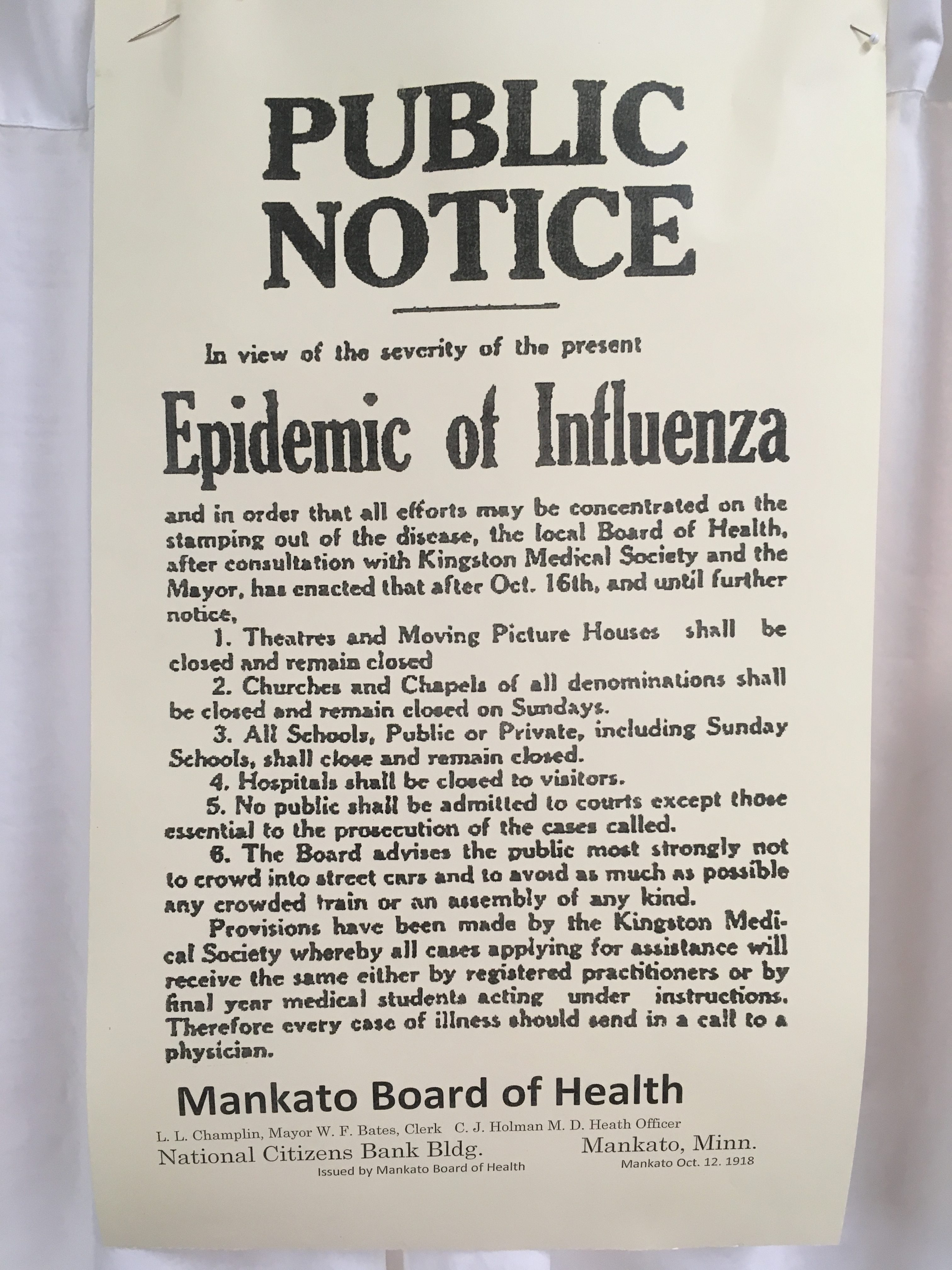 In March and April 1918, people across the United States began coming down with influenza. While the illness rarely lasted more than a week and the outbreak appeared to vanish after several months, this was simply the first wave of a strain of influenza that became known as Spanish Influenza. While it vanished from the United States, the outbreak spread to the rest of the world where it infected and killed millions of people before returning to America in late August. Spanish Influenza reappeared in Minnesota during the end of September 1918.

The first case reported in Mankato was on October 4. By October 11, the City Health Officer, Dr. Carl J. Holman, and the city council recognized the seriousness of the situation and took steps to prevent the spread of the disease. Mankato officials banned public funerals for flu victims, and closed churches, most schools, theaters, dance halls and pool halls. In addition, doctors quarantined some flu patients in their homes while other patients were cared for at Bethany Hospital. The hospital charged their patients three dollars per day for their hospital stay. Although this was a small amount compared to today’s costs, few people had health insurance to cover their medical expenses. Unfortunately, doctors could do little for influenza patients since it has no cure and they were unsuccessful in creating vaccines that targeted the influenza virus. This did not stop doctors from trying to cure the flu and they prescribed a wide variety of drugs or remedies including alcohol and Vick’s Vapo-Rub. Of course, none of the treatments worked.

By the end of the 1918 outbreak, Minnesota had about 150,000 confirmed cases of Spanish Flu and 8,000 deaths. In December 1918, the influenza pandemic abated throughout most of the United States, but it returned in March 1919 and again in the winter of 1919-1920. This last outbreak was especially severe in Mankato, with as many as one in twenty people getting sick, yet the city did not treat the epidemic as seriously as it did in 1918. During the 1920 outbreak, several towns in Blue Earth County decided to close public places and ban meetings, but Mankato refused to cancel its Winter Carnival. Visitors came to the carnival from all over the United States and the city officials felt the epidemic was not serious enough to warrant the Carnival’s cancellation. However, just days after the Carnival began the Minnesota State Board of Health estimated that Mankato had 600 unconfirmed cases of Spanish Flu.

By the end of the Spanish Influenza Pandemic, which lasted from March 1918 until May 1920, the disease killed about 800,000 Americans, 15,000 Minnesotans, and at least 160 people from Blue Earth County. Of about 60 soldiers from Blue Earth County who died during World War I, roughly half of them, including one army nurse, died from influenza in 1918.