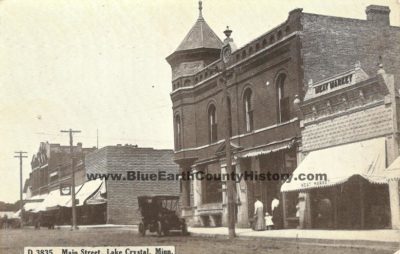 The trail of events that forms the history of a community often takes some sharp curves.  The factors which influence the young, growing community lead to some unpredictable outcomes.  In June of 1854 two unrelated men, William R. Robinson and Lucius O. Hunt, both from New York State, ended their mutual quests for desirable government lands upon which to locate with their families.  They beheld for the first time the three beautiful lakes, Loon, Crystal, and Lily, all three connected and beautifully edged with fine groves of oak trees inside a rich prairie. Both men took claims on the south shores of Crystal Lake and Lily Lake.  Mr. Robinson took a mile-long strip of land just to the east of Mr. Hunt’s similar strip.  In fact, what is now Main Street of Lake Crystal was once the fence line between the two properties.

The community of Crystal Lake prospered at first, but in the summer of 1862 friendly Dakota Indians warned the new settlers to seek shelter from the destructive bands of desperate Dakota warriors.  However, Robinson and Hunt, who had been especially close to the Dakota, remained with their families in the young community while nearly all the other settlers fled.  After the Dakota Conflict ended, the settlers returned followed by many more, and Lake Crystal was born as a prosperous new community, a sort of phoenix rising from the ashes of the old village.

The railroad’s coming in 1869 provided a big boost.  The first post office had been established on Loon Lake in the home of S.A. Cookson in 1867.  Mrs. Cookson was the first postmaster.  The first school was taught in 1869 by Mrs. Abbie Tuchey in a frame building.  Later in 1882 a brick schoolhouse was built, costing $8000 with a seating capacity of 240 scholars.  The founders, Robinson and Hunt, died in 1873 and 1896, respectively.