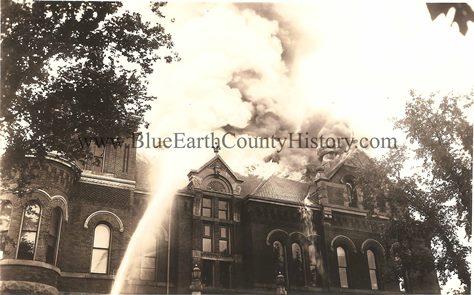 Mankato High School, a majestic building constructed in 1891, burned to the ground on July 19, 1941. The building had been condemned in 1939 because the state fire marshal’s office had found it unsafe, but repairs had been made afterward in an effort to save the building. However, these changes were not enough.

During the noon hour on that hot July day, a fire suddenly exploded in one of the upper story rooms. Later, the Mankato fire department said the flames were caused by faulty wiring. The fire quickly spread through the ventilation system to the building’s dry roof timbers and, within an hour and a half, both two stories of the building were destroyed, only the brick shell remaining.

Both shifts of firefighters plus volunteers rushed to combat the blaze, but they were unable to control the flames. Within a few hours, all that was left of Mankato High School was a black, smoldering wreck. The estimated damage was $250,000. Precious school memorabilia such as old speech and athletic trophies were destroyed, but passionate band students, along with their director, braved the flames by running up to the third-story music tower to save their band uniforms, instruments, and trophies.

No one was injured during the fire, which could have claimed hundreds of lives had school been in session. The only people in the building when it burst into flames were school election officials and 11 young men taking a civil service exam. They all escaped without injury. A janitor was reported to have been trapped in the flames but he really was safely outside.

In the wake of the disaster, Mankato High School students were sent to Lincoln Junior High for classes. Rooms were extremely crowded and older students had a hard time squeezing into desks made for twelve-year-olds. For years, school board members debated where to build the new high school. Finally, in 1947, high school students got fed up with waiting and staged a protest march. They were counting on the support of their principal, but he backed out at the last minute. Still, the students refused to give up, and almost the entire student body walked out of the school and marched to the Free Press office, picking up a sympathetic police escort on the way. They told their grievances to the paper and continued their school strike until board members agreed to speed up their decision. In 1951, a new high school was opened: Mankato West.

Learn more about the buildings on South Front Street by purchasing this video.

Check out this History in a Minute about the Mankato High School.