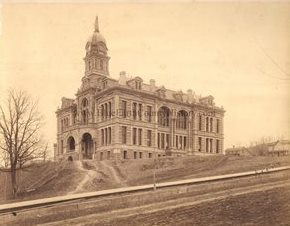 For one week a year, when the Blue Earth County Fair is held there, the sleepy town of Garden City gains prominence.  Surely the town would be more prominent year-round if Garden City were the county seat as many hoped it would be.

Historical reports allude to an “antagonism” between Mankato and others in the county, and it is said that many county residents hoped the county seat would be in a more central location, such as Garden City.  The issue came to a head when, three years into its existence, Blue Earth County leaders were still meeting in homes and halls.

In 1856, $900 was spent on a one-story log jail on the present Historical Courthouse block in Mankato; a one-story frame house for the sheriff was built there as well.  A state bill in 1861 sought to move the county seat to Garden City, but it failed.  When in 1867 the Legislature authorized the county to issue $10,000 in bonds for a new jail the stipulation was made that the location of the building be decided at a county election.

Mankato won the election, and a new two-story building with a jail, sheriff’s quarters, and county courtroom was built on the courthouse block.  Despite the continuing rancor, the building was expanded at least once while other recommendations were made for a better building.

By 1885 when the Legislature authorized the issuance of $75,000 in bonds for a new courthouse, antagonism had risen to such a degree that the bond issue was soundly defeated.  But two years later a bond issue of $30,000 to build a courthouse at Mankato passed a county election and in 1889 it opened.  The total cost was $123,000, and it was considered the finest in the state outside of the Twin Cities.

Because of continuing bad feelings, however, no formal dedication was conducted until 100 years later.  By then, despite several renovations, the courthouse had nearly outlived its usefulness.  In 2009 it was designated the Historic Courthouse after the District Court was relocated to the new Blue Earth County Justice Center.

Watch this History In a Minute for a quick overview!

Learn more about the Founding of Blue Earth County.