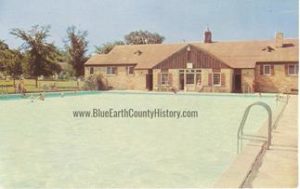 You might have driven by Tourtellotte Park and thought about where the name comes from, or the bit of history about the origin of the park.  America was at its lowest point in the 20th century, the great depression affected everyone from New York to California.  Mankato was not immune to the national crisis.  To combat this, in 1935 the Federal government formed the Work Program Association- WPA.  Its goal was to provide work for people affected by unemployment due to the depression.  A majority of the WPA’s work was working with state and local governments to fund projects.  In our case, Tourtellotte park.  In 1936 the National Bank of Commerce donated land to the City of Mankato for a park, and later that year, Mankato City Council provided additional land for recreational, and playground use.  The original park boasted of one swimming pool, a bathhouse with the plans to expand additional tennis and badminton courts.

The park is named for Colonel John Eaton Tourtellotte, born July 3rd, 1833 in Thompson, Connecticut.  He came to Mankato in 1857, was a gentleman and a bachelor adored by men and women at social events.  He would practice law with then District Judge, Judge Franklin Harper Waite at the age of 33.  At the time, Mankato was not filled with elderly people, it was still new.  Those that came to Mankato at the time were young couples from the East and settlers with young children.  Tourtellotte served with honor in the Eleventh Minnesota Militia during the Civil War as a Lieutenant Colonel.  He organized Company H Fourth Minnesota Infantry, advancing to Regimental Colonel commanding in the battles of Champion Hill, Chattanooga, Vicksburg, and Altoona Pass.  Later he served under General William Tecumseh Sherman, taking part in the famous “Sherman’s march to the Sea” in winter 1864.  At the conclusion of the Civil War, Tourtellotte was named a Brigadier General in the United States Volunteers.  He would be called back to Washington and offered a commission in the 26th US Infantry as a Detailed Superintendent of Indian Affairs in Utah.  He would be transferred to the Seventh Calvary led by General George Custer.  As luck would have it, he was recalled back to Washington to act as General Sherman’s aide at the rank of Colonel.  Tourtellotte lived and served in multiple locations, crossing paths with figures known in US History books, and never forgot about Mankato.  To show his affection, he donated eight thousand dollars to Mankato for use to build a hospital.  Over the year’s, mismanagement marred Tourtellotte gift, however, Mankato wanted to honor their benefactor.  In 1940, his name was used for the park created by the aid of the WPA and City of Mankato. Tourtellotte park was praised by businessmen at the time “Tourtellotte Park and swimming pool is more than a place to go swimming, it’s a place where the parents can send their children and know they are safe”.

The same sentiments are still echoed by those who have laid out a beach towel, watching their family and friends learn, and play on a hot Mankato afternoon since Tourtellotte Park’s inception.  It’s a landmark of history, for your childhood memories of summers, for Mankato a positive reminder of a past we can all be grateful, and proud of.

For more information about Tourtellotte Pool hours, visit their website.