The Ghost of Yaeger School House?

The Ghost of Yaeger School House? 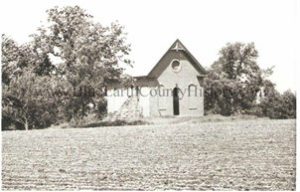 Teams of horses disappearing from their stalls, and reappearing the next day.  Smoke coming from a schoolhouse at strange hours.  Sheets vanishing from clotheslines.  Books missing from schools.  Was it a ghost, or a very clever thief?

Silas Gray was arrested in June 1897, in Fairmont, charged with the theft of a bicycle stolen from a Mankato store.  But as his story unfolded, it became “one of the most remarkable tales ever related in criminal annals,” according to the June 12, 1897, Mankato Free Press. Both the Free Press and the Good Thunder Herald had reported on a number of strange incidences going on in the county for months.  Teams had been taken from barns and found tied to a neighbor’s tree the next morning, having been driven hard.  A cow disappeared one afternoon and wandered home the next day, milked.  Items had gone missing from chicken coops, smokehouses, clotheslines and even basement shelves stocked with preserves.

Then, on the night of February 4, 1897, the depot at Garden City was broken into and about $1,200 worth of merchandise was taken.  That brought in the Pinkerton detectives. But it was an alert Martin County Sheriff who recognized a red bicycle in Fairmont, stolen from Jensen and Perrin in Mankato.  Arrested on suspicion of both robberies (and possibly the theft of butter from the creamery in Lake Crystal), Blue Earth County Sheriff Bowen put Gray in a sweat box on the train ride back to Mankato, where Gray confessed to the robberies, and more.  He revealed his hideout for 18 months was under the Yeager school house (located east of Rapidan).

Here the story became material for a novel.  Gray had devised two entrances, one a trap door under the teacher’s desk, the second a doorway carefully cut out of the wainscoting on the north wall, with a weighted closure, leading to a 6 ½  by 7 by 9-foot room dug out under the building.  This cozy space had boarded and wallpapered walls, Brussels’ carpet, an oil stove, a bed, table, desk, lamps, clock, dishes, and books.  The Yaeger Schoolhouse ghost had everything he needed to keep himself comfortable during the day, while school children studied their sums over his head.

As his story was put together with other mysterious happenings, all began to make sense.  It explained why smoke had been seen coming from the schoolhouse chimney on a summer afternoon, but the stove was cold.  Now it was assumed a ham that had disappeared from a smokehouse, or preserves missing from a basement with an outside entrance, or school books taken from several schools in the area had ended up in the hideout under the Yaeger school.  It also explained where the team of George Darby, three miles south of Rapidan, and the sleigh of his neighbor, James VanWinkle disappeared to on the night of February 4, coming home driverless but covered with sweat the next morning.  There could have been no coincident that the Garden City depot had been robbed that very night.

Perhaps feeling the law was getting too close, Gray began to move his possessions to a room he had rented in Fairmont.  To help with the move, he had taken a team of grays from the barn of Al Brush, near Amboy, and a buggy from C.H. Brush’s barn nearby and moved two loads from the schoolhouse.  He then left the team and buggy in the woods near Winnebago, and sent the owners postcards, telling them where their property could be found.

Silas Gary, which was an alias for Cyrus B. Miller, had escaped from prison in Lincoln, Nebraska two years earlier.  He had, at one time, been a school teacher, and his father, writing to the judge in his son’s defense, stated that he had been a dutiful son until a few years previous when he began to act peculiarly.  His father wondered if he was mentally deranged.  However the court did not take his father’s concerns into consideration, and Miller was sentenced to five years and six-month imprisonment in Minnesota, then to finish his term in Nebraska.

Thirty years after Miller’s arrest, the Good Thunder Herald interviewed the teacher, several students at the Yaeger school and neighbors who remember some of the mysterious events of 1896-1897.  When word of the Yaeger School ghost became public, people flocked to see the thief’s den.  Someone had the idea to charge ten cents admission, but the money collected was not enough to cover the repairs to the floor, wall, and chimney.  However, the Yaeger school still stands. What remains of that comfortable hideout is unknown.