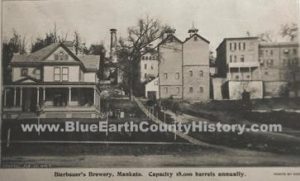 Beer is an everyman’s drink. It came from a region of humble pursuits, like so many of our ancestors. Beer’s homeland had many of its residents emigrate to the U.S. during the latter half of the 19th century. They carried their brewing culture with them across the Atlantic. Beer quenched the thirst of these newly arrived immigrants pursuing the American dream. Some of these transplants settled in southern Minnesota and chose to continue the cultural exchange by founding breweries in Mankato.

In 1842 the lagering technique was crafted in the city of Pilsen, Austria. This new type of beer production created a clear, golden beer that required storage in cold caves for several months. Lager appealed to German immigrants who were settling themselves throughout the United States in the latter half of the 19th century. The beverage was first deemed “too fashionable” but later became known for its popularity among all classes. It was known for its ability to bring a community together. Beer was a symbol of democracy.

Bierbauer Brewing Company was the first brewery built west of St. Paul, MN. Many people want to say it was the first west of the Mississippi River, instead of the capital city that runs alongside it, but its trailblazing location within the U.S. is still impressive. William Bierbauer and his brother, Jacob, had fled Germany’s 1848 revolutions and after arriving in the U.S. became part of Mankato’s first founding residents. During the Dakota Sioux Uprising, the brewing company’s founder, William Bierbauer was appointed captain of the Mankato Militia. He was instrumental in ending the assault on nearby New Ulm, home to Schell’s Brewing Company.

Today you can see two remaining stone pillars from the original entrance to the Bierbauer Brewing Company. In 1862 the company had moved among the hills of North Rock Street. This gave the brewery access to geographic necessities for the brewing process in the age before electricity. Bierbauer beer kegs were kept in hillside caves to maintain a chilled temperature before consumption. This lagering type of storage made Bierbauer’s beer a cultural tradition imported to Mankato from the founder’s homeland of Bavaria.

Bierbauer Brewing Company bought out the Standard Brewing Company in 1908, an already merged company of Haas and Schmidt Brewery with George Lieferman Brewery. These Mankato area brewery founders and operators’ Germanic surnames are indicative of the area’s cultural heritage. As previously discussed, many German immigrants brought with them not only a thirst for the alcoholic beverage but the techniques to make it in a variety of ways.

1919’s Prohibition Amendment, while never legally outlawing the consumption of alcohol, did make the production, distribution, sale, and transport of any alcoholic beverages a federal offense. This spelled the end of many breweries that did not convert their fermenting tanks to meet the lower standards allowed during Prohibition. Beer did not resemble beer anymore – it was a sub-par flavor experience whose consistency resembled the lakeside sludge seen during Minnesota’s hot summer months.

Many breweries elected to close their doors until Prohibition would be overturned. Bierbauer Brewing Company chose to wait 14 years until Congress repealed the 18th Amendment in 1933 with the 20th. That same year Bierbauer changed ownership to Minneapolis millionaire G. R. Martin and was renamed Kato Brewery.

April 7th, 1938 marked the 5-year anniversary of “beer’s return” to America’s parched mouths with the passage of the Cullen Bill. In 1937 the U.S. alcoholic beverage industry’s revenues were exceeded only by federal income taxes; Minnesota beer alone contributed $34,000,000 to the Federal Treasury between 1933 and 1937. Beer’s return to the nation, Minnesota, and the local area had great implications for the economic future.

The re-legalization of beer revitalized not only the brewing industry itself but the agriculture sectors that grew the barley, wheat, and other grains used in its production. By 1936 Minnesota, Wisconsin, and the Dakotas harvested more than 40 percent of the nation’s total barley crop, with premium prices for malting barley used in crafting beer being paid 30 to 40 percent higher than feed barley. 40 percent of the taxes paid by beer producers in Minnesota provided funds for public schools and other education programs, unemployment relief, old-age pensions (similar to today’s Social Security), and various public health and welfare services. Beer was helping to rebuild post-World War II America.

Kato Brewery, now known to the area as the Mankato Brewing Company (not associated with the newest brewery incarnation located in North Mankato), closed its doors in 1967 due to financial difficulties. Only about 10 percent of the brewery’s product was sold in the Mankato area. The site of the brewery at 628 Rock Street was purchased for $7,300 by a neighboring Mankato resident, Harlow Norberg, at a public auction on December 16th, 1970. While some wanted the buildings to remain, possibly even be converted into a space for the town’s historical society, a stipulation of the purchase was that the buildings had to be razed from the 5-acre property, removing a large part of Mankato history with them.