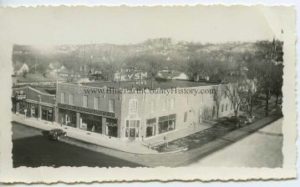 Mankato’s first radio station was KYSM, which was constructed in 1938. The station cost about $100,000 to build, which is about $1.5 million in today’s prices. KYSM had two studios, a 281-foot radiator tower and the best equipment of the time. During the day, its broadcasting power was 250 watts, and during the night, power was 100 watts. The station went on-air from 6 a.m. to 1 a.m.—19 hours.

Plans for the station began much earlier. A hearing occurred in 1935 to discuss the possibility of a station in Mankato, with the Hubbard Milling Co. voicing a desire for a station. The milling company constructed the new station’s studios two blocks away from the mill. As its listening audience grew, Hubbard Milling Co. expanded the station’s range to other stations such as Mason City, Iowa.

KYSM began as an NCB AM-radio affiliate but switched to the Mutual Broadcasting System in 1983. The station began broadcasting on FM signals in 1948. It was the first area station to try the new wave.

Throughout the years, KYSM has played a variety of programs, from small, local groups to Latin music to syndicated shows such as the “Larry King Show.” It also gained a fallout shelter in 1983. Fears of a nuclear holocaust hit Mankato during the cold war, and KYSM management wanted to be able to broadcast emergency warnings in the event of a nuclear attack.

While KYSM has had a long and successful run, it was not without its conflicts. In the mid-’70s, station employees went on strike over wages, hours and union security. Part of the issue was the station management wanted to switch to more automated equipment, cutting down on workers’ hours. Seven on-air staff members and two part-time workers petitioned their concerns through the American Federation of Television and Radio Artists, which KYSM workers had joined a few months previously. The strike lasted seven months before workers and management reached an agreement.