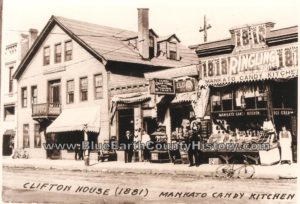 February 1893 was an as auspicious month for anyone in the area with a sweet tooth.  Rosenberger & Nobles, candy makers from Chicago, opened their wholesale business at 408 S. Front Street in Mankato.  A month later they were already making 1000 pounds of candy a day and had just introduced two new confections, pineapple creams, and glazed pineapple.  Nobles sold out to F.M. Currier in 1895, and the business continued to grow.  Over two hundred kinds of candy were produced at that time.  The specialty was bonbons and chocolate creams.

Ernest Rosenberger had come to Mankato to work for C.A. Everhart who owned another wholesale company, The Mankato Cracker and Candy Company.  The company seems to have grown, until the competition from Rosenberger.  It was sold in 1895 and closed in the early 1900s.

By 1897, Rosenberger and Currier were manufacturing between 150 and 200 kinds of candy, producing 3500 pounds daily.  1000 to 1200 barrels of sugar were needed yearly.  The business employed twenty people at the factory, and four “travelling men,” who covered a territory of Southern Minnesota, Northern Iowa, and Eastern South Dakota.  Their businesses motto was “‘How Good’ not ‘How Cheap’”.

The business moved into a new building that year, at 2nd and Walnut.  The second floor was divided into a stick candy room and a cream room.  There was a dry room off the cream room where temperatures was kept at 130 degrees.  Steam was used for heating kettles, and coke, which burns without smoke and creates a hot fire, was used for other heat.

A new brand was announced in 1905 called Hermosa Chocolates.  They came in maple, vanilla and milk centered.  Each chocolate was wrapped in wax paper, and they were sold in one half, one and two pound boxes.  “We are confident that the ‘Hermosa” will be given the preference over foreign goods, which are enjoying a larger sale in our city than they ought to, considering the fact that we have a local establishment turning out such high grade goods,” wrote a reporter for the Mankato Review.

During World War I the National Food Administration allowed candy makers to use only 80% of the sugar they had previously used.  The company needed to shut down temporarily in June 1918 to comply.  Candy production resumed for several more years.  However, the company was dissolved in 1934.

Rosenberger had a second claim to fame.  In 1902 he purchased an automobile for his salesmen.  Those opposed to autos, especially livery stables who rented horses and buggies to traveling salesmen, threatened to boycott stores that sold Rosenberger & Currier candy.  Use of the car lasted only briefly.  It could have been the threat of boycott, or the condition of the roads.

The day it took Rosenberger two hours to get up the Belgrade Hill because the rear wheels slipped led to his invention, and patent, for a four-wheel-drive vehicle.  He formed the Four Traction Auto Company in 1908, which briefly manufactured the Kato Car.

Rosenberger and Currier were not without competition.  The Pay Candy Company opened in 1902, owned by B.D (Benjamin) and Will Pay, father and son.  They were located at 114-119 E. Hickory.  The Pay family had been candy makers in England, but when they first arrived in Mankato B.D. ran a livery stable.  However, he couldn’t forget candy.  It was reported that his turn-out buggies were painted in stripes, and the bridles were trimmed in red and green.  The Pay Candy Company struggled during the war due to the sugar shortage and closed in the early ‘20s.  Will Pay opened the Ben Pay Hotel in the building in 1926.

Although the wholesale companies dealt in quantities, many candy makers served the local trade.  There were eighteen confectioners in the county in 1900, according to the City Directory.  The Mankato Candy Kitchen, for example, opened in 1903, selling retail at 219 S. Front.  By 1905, it included an ice cream parlor, and a soda fountain had been added by 1912.  According to an advertisement in 1905, fruits, nuts, and cigars could also be purchased.  One pound of vanilla chocolates could be purchased for 20 cents, and a quart of ice cream for 25 cents. The Mankato Candy Kitchen closed in 1952.