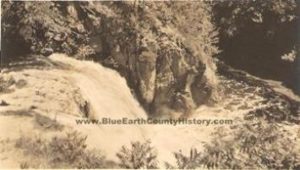 The word “Minneopa” comes from the Dakota language, and is translated to English to mean “water falling twice”. Why the name was chosen is clear – there are indeed two falls in Minneopa State Park. Beautiful falls, and a lovely park overall. But what about the park’s history? What has happened to bring us the beautiful park we have today?

In 1700, the first Europeans arrived in the area, led by Pierre-Charles Le Sueur. From nearby Fort L’Huillier, they supposedly traveled to Minneopa, visiting the falls and hunting bison. As the Treaty of Traverse des Sioux in 1851 opened the region to white settlers, families began building homes by the falls around 1853.

The first business catering to visitors was the Minneinneopa Park Hotel, opening in 1858. Run by Miner Porter, it was part of a beautiful resort. Porter planted trees and flowers and made walking paths for people to enjoy the land. The hotel closed in 1870, functioning as a home and then a dairy farm before it burned in 1906.

On 7 October 1859, a fair was on the land by the Agricultural Society of Blue Earth County. The fair, supposed to “promote and encourage the science of agriculture”, was to become one of the oldest fairs in the state – the Blue Earth County Fair. With the exception of 1862-63, the fair has been held annually since.

In the late 1860s, the St. Paul and Sioux City Railroad laid a track along Minneopa Creek. The property owner, D.C. Evans, talked them into building a station at the falls. The depot agent, J.B. Hodge, also believed in the fall’s potential, convincing the railroad to have 4 trains go to the park each summer day. Evans then built bridges and steps down to the falls, accommodating visitors. Group excursions as large as 5,000 came from towns far and near to enjoy the falls.

With the area booming, Evans platted the town of Minneopa in 1870, which grew quickly.  However, grasshopper plagues beginning 3 years later doomed the town. Crops failed, so the people could not sustain themselves there, and the town, including Minneopa Cemetery, was quickly abandoned.

Not long after, in 1876, the James-Younger gang came to town. They hid out in the park, most likely due to sheer exhaustion, after their ill-fated attempt at robbing Northfield First National Bank. However, sounds of over-eager lawmen alarmed the gang, and it was here that they split up, soon to be captured.

Evans sold out in 1885, and over the next several years there were many owners. The park was popular, but no private endeavors as such lasted. By 1903, the owner was considering turning it into a pasture. Luckily, in 1905, State Representative Ezra Gates introduced a bill to make Minneopa a state park, Minnesota’s third. By this time, there was yet another owner, who reluctantly sold 25 further acres to the state. Continued support led the legislature to increase the parks’ land and funding.

The park’s first superintendent was J.B. Hodge, the railroad agent who had done so much to promote the park from the start. With state funding, he improved existing stairs and bridges and contributed many more features. Over the next years, developments included a bridge into the park, a shelter, and stabilization of the waterfalls. In 1927, the head of the park’s advisory board planted an orchard of black walnut trees, thinking nut sales could be a source of funding. He only informed the state after he had done so.

In 1931, nearby Seppmann Mill, built by Louis Seppmann in 1864, was donated to the park. The mill was on land a mile northwest, not yet connected to the park. This, along with the recent improvements, helped the park; however, the Depression stopped work for several years. Soon after, however, teams of men from the Works Progress Administration came. They were there from 1937-1940, improving the park with new stairs and several new buildings.

The cemetery left by the old town of Minneopa was still in the park all this time. Originally owned by South Bend, it had been incorporated under the State in 1917. In 1908, rains had caused a landslide from the railroads’ nearby cut into the hillside, washing down several bodies. The railroad awarded the town $6000 for repairs, but officials used only $200 for that purpose, using the rest for town development.  This misuse of funds outraged the settlers, who took the cemetery from the town and incorporated it.

39 years after the incorporation, the settlers negotiated with the state to trade some land north of the cemetery for land west of it, which was more suitable for a cemetery. This exchange went through, although it took nearly nine years to prepare the “new” cemetery. In 1955, nearly 100 years after the old cemetery’s first burial, the new cemetery had its first.

While the WPA had helped, Minneopa Park was still small, had no campground, and attracted primarily local use. By the 1960s Minnesota was transferring many such parks to city or county management; Minneopa needed to expand to stay a state park. The locals once again rallied, and in 1967, the state secured funds to expand.

The new land, purchased mostly from heirs of the Seppmanns, included lower Minneopa Creek, 3 miles of the Minnesota River, and finally connected the Seppmann Mill with the rest of the park. The new land was dedicated in 1972, home to a campground, picnic area, and a path to the mill. Over the next five years, volunteers made hiking and skiing trails. There is no trail along the river itself, as each attempt was met with flooding.

From a tiny town to a hideout for a notorious gang, Minneopa State Park has an interesting history. It has come so far from simply being a beautiful example of “water falling twice”. Hopefully, its’ history will last for many years, so we can have a fuller appreciation for this place we know and love.