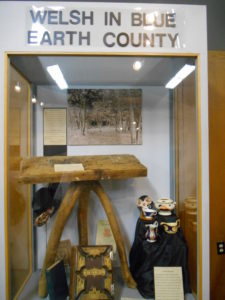 Can a pulpit, made of rough wood and a three-pronged branch, be deemed a symbol of Welsh settlement in Blue Earth County?  It has been said that in settling a new country, the first thing a Frenchman built as a trading post, an American built a city, a German-built a beer hall, and a Welshman built a church.  Church building certainly was important to the early Welsh settlers.  Churches were established as quickly as possible in their new settlements.  If there was no pastor available, at least Sunday School, Bible Societies, and Prayer Meetings could be held.  Not only did their churches serve their devout faith, but they also kept alive Welsh heritage.

The Welsh settlers who moved into Blue Earth County in the 1850s were seeking economic stability and were attracted by the rich farmland and ready availability of lumber.  They were also seeking religious freedom. Many came to America in the first place because they were required to tithe to the Church of England, even though they followed the teachings of reformers like John Calvin or John Wesley.  Rev. Richard Davis, who settled in South Bend (not the present town) in 1855 planning to establish a town there, wrote back to Wales extolling the richness of land along the Minnesota River.  121 Welsh Americans from Jackson County, Ohio moved to South Bend in April/May 1856, and Rev. Davis almost immediately began holding services in his home.

Religion and language were closely related in the life of the Welsh.   At one time there were eleven Welsh-speaking chapels in Blue Earth County.  Many became part of their own distinct denomination, known as the Welsh Calvinistic Methodist Church in the United States.  These churches helped maintain Welsh heritage, and services were held in Welsh until about 1917, with English services being held monthly until about 1941.  The Calvinistic Methodists merged with the Presbyterians in the 1920s, and were known as “Welsh Presbyterians.”

What about that old pulpit, one of the first used in the county?  Almost 130 years old, standing only 3 feet high, it was built to fit the shorter statue of the day.  Called a Prairie Pulpit, it was used by the Jerusalem Methodist Church during their cwrdd mawr or preaching meetings, held in a grove on the Jones-Roberts farm north of Lake Crystal.  Local chapels were too small to hold the number who attended as people came by wagon or on foot from as far as Mankato for the preaching, singing, and socializing.  The pulpit was given to the Blue Earth County Historical Society in 1952.  It can be seen as part of the exhibit on the Welsh in the county.

If that old Prairie Pulpit could speak, we would undoubtedly hear the melodious flow of the Welsh language, and the beauty of Welsh singing, which can still be experienced in the yearly gymanfa ganu.

Learn more about the Welsh in Blue Earth County by purchasing this Video.