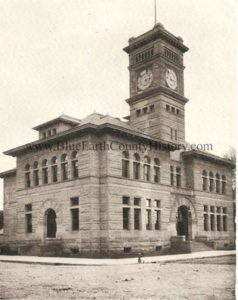 The Mankato Post Office first opened in 1853 in a small building located on Front Street across the street from the First National Bank. Parson King Johnson was the city’s first postmaster. The post office then moved to the 300 block of South Front Street, followed by moving to the corner of Front and Hickory Streets. This location was not large enough for the post office and in 1891 they started looking for another location to house the post office in Mankato. The three possible locations included the corner of Second and Hickory Streets, the corner of Front and Jackson Streets, and the corner of Second and Jackson Streets which ultimately was the location they decided on.

In 1932, the post office underwent renovations and had an additional 3300 square feet added to the building. The two large towers, including the clock tower, were removed. The addition was completed with Vetter Stone and was seamlessly added to the old building.

There was another addition to the post office in 1966 when 6000 square feet was added to the rear of the building. During this remodel, the post office also updated the boilers in the building, added air conditioners, purchased new mail trucks, and added a new ZIP Number sorting system to make sorting mail easier.

On June 17, 1980 the post office building was added to the National Register of Historic Places. The primary reasoning behind adding it to the register was because of the Richardsonian Romanesque design of the original building as well as the 1932/1933 addition to the building.